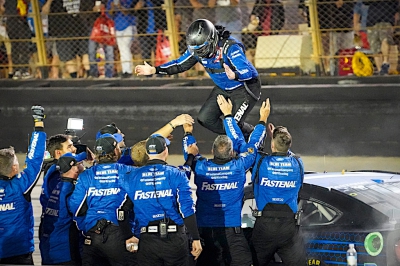 “Congratulations to Jack, Brad, Chris, Scott, and everyone at Roush Fenway Keselowski Racing on the win at Bristol,” said Doug Yates, President and CEO of Roush Yates Engines. “Chris and Scott executed their plan throughout this race, including the last 2-tire stop for a well-deserved checkered flag.”

"We had a really fast Fastenal Mustang. Just so proud of everybody. We knew we had a good race car after practice and didn’t quite get the job done in qualifying, but what a race car. It’s just special. Get RFK in Victory Lane for the first time, and we had great race cars. Brad had really good speed, too,” commented Buescher.

Aric Almirola with Stewart-Haas Racing started Saturday’s 500-lap race from the pole with teammate Chase Briscoe beside him on the front row and 4 other Ford Performance drivers in the top 10: Ryan Blaney with Team Penske in P6, Kevin Harvick with Stewart-Haas Racing in P7, Austin Cindric with Team Penske in P9, and Brad Keselowski with Roush Fenway Keselowski Racing in P10. Brad Keselowski won Stage 1 of the race to score his first stage win of the season, leading a total of 109 laps. The race, one of the season’s toughest, saw mechanical issues across the playoff grid and made the cut line for the playoffs a movable target throughout most of the race. Buescher made a 2-tire pit stop on lap 439, moving him from fourth to first and maintained the lead for the final 61 laps of the race. Buescher took the checkered flag with a .458 second lead over second place.

The NASCAR Cup Series Playoffs continue next Sunday at Texas Motor Speedway with the first race of the Round of 12 while the Xfinity Series begins its first playoff round on Saturday.