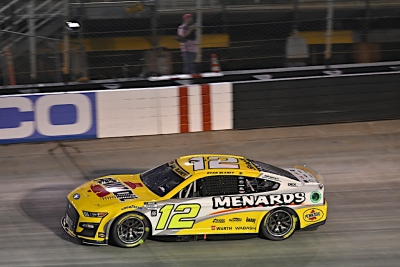 Race Rundown: Austin Cindric and the No. 2 Freightliner team are coming away from a drama-filled Round of 16 finale at Bristol Motor Speedway with the 20th-place finish and a ticket to the Round of 12. Cindric began the night from the ninth position, but a flat right front tire on lap 83 sent the Team Penske driver to pit road for an unscheduled pit stop, causing him to lose significant track position at the 0.533-mile short track. Cindric’s night quickly turned into a game of managing the race over the remainder of the event, navigating a plethora of cautions, and utilizing the misfortunes of others to his advantage. The grit and determination of the No. 2 team never wavered, keeping the NASCAR Cup Series rookie in the fight. Cindric advanced to the Round of 12 by a slim two points to keep his championship hopes alive, joining fellow Team Penske drivers Joey Logano and Ryan Blaney in the second round of the NASCAR Playoffs.

Cindric’s Thoughts: “For a while I was just trying as hard as I can and as they fell off like flies just trying not to force any issues, try not to force any more right-front tire failures. From there, I think I was tied with the 18 for 100 laps, but just one hell of a night. I still don’t think this place loves me back, but it probably showed me a little mercy tonight, so I’ll take it and run with it. We’ll be on offense for the next three races just like we were to start Darlington this round and have some fun with it.”

Race Rundown: Ryan Blaney and the No 12 Menards/Pennzoil Ford Mustang finished 30th Saturday night at Bristol Motor Speedway. After starting in the sixth position, Blaney wasted little time moving to the front, taking the lead on lap 36. Following a caution on lap 43, Blaney would pit from the lead. He would begin to work his way back to the front until a cut tire sent the Menards/Pennzoil Ford into the wall. The crew would make fast repairs on pit road, but the damage proved to be more severe, and he would spend over 150 laps behind the wall for repairs. Blaney would return to competition crossing the line in 30th at race’s end. The points accumulated locked the No. 12 team into the Round of 12 in the NASCAR Playoffs.

Blaney’s Thoughts: “You never know what can happen and having that flat, there’s nothing that we can do about it. You’re lucky you have that cushion going into this race. The most unfortunate part is our car was super fast, too. That was the terrible thing about it. The worst part about it now, looking back. The car was really good and just had no indication. It seemed like a lot of guys had right-front problems tonight, but I’m proud of everybody for getting it fixed up and just out there to finish the race. There really wasn’t much we could do, just log laps, and let everything play itself out. That’s why you try to have two good races beforehand because you never know when you’re going to need some points.”

Race Rundown: Joey Logano had an up and down night in Saturday’s Bass Pro Shops Night Race at Bristol Motor Speedway which ultimately ended up behind the wall. Logano started 15th and would maintain position outside the top-15 in Stage 1. Fortunately, the points accumulated in Stage 1 locked Logano into the Round of 12 in the NASCAR Playoffs. Crew chief Paul Wolfe would take several swings to make the balance better throughout the night and eventually it paid off as Logano moved inside the top-10 late. Unfortunately, a strong night would come to an end as Logano would join the list of many drivers with tire issues. The damage proved to be too severe, and the Shell-Pennzoil Mustang was retired from competition on lap 437.

Logano’s Thoughts: “Not a great night for us. I thought we made our Shell-Pennzoil Mustang better as the night went along and unfortunately, we lost a right front tire late and had suspension damage. Certainly, a bummer, but we locked ourselves into the next round and happy for Ryan and Austin too.”