Buescher Rebounds for Top-15 in Kansas 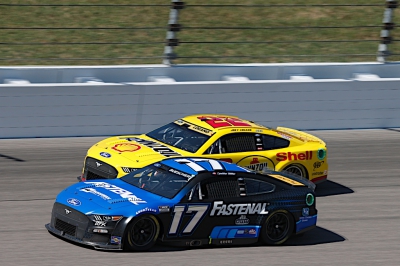 Starting his weekend off with a top-10 qualifying effort – the eighth for the No. 17 team this season – Chris Buescher looked to parlay his momentum into another strong run.

At the drop of the green, the Fastenal Ford struggled to maintain track position, making set of adjustments under the competition caution at lap 25. After a caution occurred on lap 35, Buescher declined to pit and would race his way to the seventh position on the next restart. Unfortunately, contact with the wall would bring the No. 17 car down pit road under green shortly thereafter.

The Fastenal crew serviced the car for a broken toe link, four new tires and fuel, while another caution flew for incident on the track. The Texas Native would fall three laps down before the end of stage one.

With help from a slew of cautions to open the second stage, the No. 17 was able three free passes to get back on the lead lap. With an 18th place finish in stage two, it was all eyes on stage three for a run to the checkered.

Constantly adjusting to ever-changing track conditions, Buescher relayed that the right rear tire had lost grip coming down to the pit stop in stage three. The No. 17 crew gave Buescher a quick stop with four tires and fuel, allowing him to gain a few spots and bring home a 15th-place effort in Kansas.