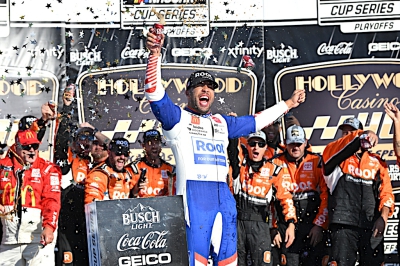 Driving the same car number that carried teammate Kurt Busch to victory in the May race at Kansas Speedway, Bubba Wallace claimed a dramatic win at the same track in Sunday’s Hollywood Casino 400, the second event in the first round of the NASCAR Cup Series Playoffs.

Wallace regained the lead on Lap 225 after the final cycle of green-flag pit stops at the 1.5-mile track and stayed out front for the final 43 circuits as his car owner, Denny Hamlin, chased him to no avail.

“Man, just so proud of this team, so proud of the effort that they put in each and every week,” said Wallace, who won for the first time this season and the second time in his career. “Just thankful for the opportunity, right? Took this jump from an idea two years ago from a text from Denny before it all even happened. He was ready to get the deal done…

“Just so proud. Pit crew was awesome today. We had one loose wheel. Just thankful. Thanks for the opportunity, and thankful to shut the hell up for a lot of people.”

Wallace is competing for the Cup Series owners’ championship in the car Kurt Busch drove for the first 20 races of the season before suffering lingering concussion-like symptoms after a wreck in qualifying at Pocono. With his win, Wallace qualified for the Round of 8 in the owners’ competition.

Christopher Bell, who ran third, is the first driver to lock himself into the Playoffs’ Round of 8 on points. The other 15 championship contenders will have to establish their positions in the final 12—or suffer elimination—next Saturday night at Bristol Motor Speedway.

During the final run, Hamlin passed Bell for the second position on Lap 252 of 267. With 10 laps left, Hamlin trailed by 2.066 seconds but could get no closer than the final one-second deficit the rest of the way.

Hamlin clearly had mixed feeling about his pursuit of the No. 45 23XI Toyota he co-owns with NBA legend Michael Jordan.

“It's been a good overall day,” said Hamlin, who recovered from an equipment interference penalty—his 34th pit road infraction of the season—on Lap 27 under a competition caution. “Still frustrated about the first half of the race. We just aren't executing all that well…

“Really happy for our 11 Toyota team. They fought hard. They really stepped up that last half. We made the car quite a bit better. Just really happy about the outcome and really happy for that 45 team and Bubba Wallace and (crew chief) Bootie (Barker). Bubba has just really worked hard on his craft, and we've just given him fast race cars, and now he is showing what he has got.”

Other Playoff drivers weren’t as fortunate.

A sudden disaster knocked Kevin Harvick out of the race before the end of Stage 1. Racing side-by-side, Chastain and Wallace steered up the track in front of Harvick’s No. 4 Ford as the cars sped through Turn 4.

Harvick’s Mustang snapped loose and the right front of his car pounded the outside wall. With damage too severe to repair, Harvick retired from the race in last (36th) place.

“When those two cars came up in front of me, I just got super tight,” Harvick said after a visit to the infield care center. “When I lifted, it grabbed and got loose. I just wasn’t expecting them to come up and my car getting that tight.”

Harvick entered the race 16th in the Playoff standings. The last-place results puts him in a must-win situation next Saturday at Bristol Motor Speedway.

“Yeah, it is what it is,” Harvick said. “We were racing to win anyway today, so that’s what we will do again next week.”

Harvick wasn’t the only casualty of the first stage. Pole winner Tyler Reddick blew a right rear tire while leading on Lap 65 and slammed into the outside wall in Turn 2. He brought his No. 8 Chevrolet to pit road, but attempts to repair the car proved futile, and Reddick was eliminated in 35th place.

“The right-rear tire just blew like we’ve had a few times,” said Reddick, who fell to 11th in the Playoff standings. “At Fontana (Auto Club Speedway), I was able to save it. But here, it snapped at the worst possible point, and we just killed the wall.

“It broke the control arm on the right-front, so our day was over. We leave here with not a lot of points, so we’ll have to fight hard at Bristol.”

Troubles continued for Playoff drivers when Kyle Busch, whose team already had incurred two equipment interference penalties on pit road, spun off Turn 4 on Lap 137. Busch’s right-side tires went flat as he skidded toward the infield grass, and Busch lost a lap as he nursed his wounded car to pit road.

Busch got his lap back as the beneficiary under caution at the end of Stage 2, but he lost two laps during the final 96-lap green-flag run. His 26th-place finish dropped him two points below the current cut line for the Round of 8, trailing Tyler Reddick and Austin Cindric by that margin.

Joining Busch and Harvick in the bottom four are Austin Dillon (14th Sunday) and Chase Briscoe (13th). The Playoff field will be cut from 16 to 12 drivers after next Saturday’s race at Thunder Valley.