NCS: Joey Logano to start on pole for Southern 500 at Darlington Raceway 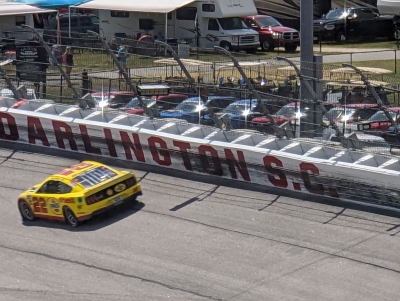 After starting on the pole in spring event at Darlington Raceway Joey Logano was able to sweep the poles in 2022 to start on the front row once again for tomorrow night’s Southern 500. The last time the pole was swept at Darlington was back in 1992 when Sterling Marlin was able to do it.

“It’s obviously nice to start up front.  We got a taste of what that first pit stall means here at Darlington and it’s nice, for sure.  It’s definitely really close to that pit out line and you don’t have to get all the way back up to speed, so there are definitely spots available in the pit stall.  You can let the pit stall do the work and feel really good about that.  It’s nice to be able to get that, but it’s just a start." Said Logano

Byron, Reddick, Ky. Busch, Cindric Larson Wallace Blaney and McDowell would round out the top-10.

Suarez was the only playoff driver that was unable to qualify due to multiple failures to start in 36th. Suarez will also be penalized with a pass-through penalty tomorrow night once the green flag falls further putting the driver of the No. 99 at a disadvantage.

Tomorrow night’s Southern 500 from Darlington Raceway will roll off just at 6:00 p.m. on USA Network.