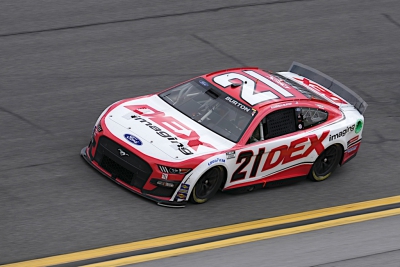 Harrison Burton and the No. 21 DEX Imaging team brought a fast Ford Mustang to Daytona International Speedway for the Coke Zero Sugar 400, but after being among the contenders for the win for the majority of the race, Burton was among a host of drivers eliminated by a wreck caused by a quick downpour with 23 of 160 laps left to run.

Burton came close to steering his DEX Imaging Mustang past the crash but was collected anyway. He wound up 19th in the final running order.

Burton started the race from 29th place on Sunday morning after rain postponed the scheduled start Saturday night. He began moving forward not long after the drop of the green flag. He was in 16th place after 15 laps and inside the top 10 on Lap 28.

After making a pit stop during the Stage break, Burton was in 20th place when the green flag flew to restart the race. Twenty laps later he was back in the top 10 and by Lap 68 he was back in third place.

He moved up one spot after a green flag stop for two tires and fuel at Lap 79.

He returned to the track in sixth place but was shuffled to 14th at the end of Stage Two. Burton avoided serious damage to his DEX Imaging Mustang as several multi-car crashes occurred around him, until the biggest of those incidents occurred with 23 laps to go. Burton was among the 12 drivers knocked out of the race when rain hit the track just as the pack entered Turn One.

Eddie Wood said that despite the disappointing finish, he was proud of Burton, crew chief Brian Wilson and the rest of the No. 21 team.

“Brian and the crew did a great job,” Wood said. “They unloaded with a lot of speed, and Harrison did a good job of putting it to work on the race track.”

Wood said that while Burton and the team will not be among the 16 teams that start the Playoffs, which begin next weekend at Darlington Raceway, there still are goals to be accomplished.

“There are still some points positions that can be gained, and they’re important to us,” Wood said. “And we want to keep building this team.”