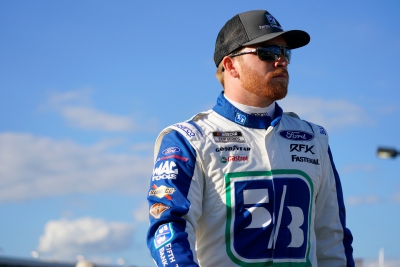 Coming off a week where Chris Buescher saw his name reference change to Christopher, he and RFK Racing will be taking a trip through the campgrounds at Daytona International Speedway this weekend as a Thank You to fans, passing out memorabilia and spending time with the Buescher faithful.

“The talk around the name change in the last week has certainly been fun,” said Buescher. “I think I underestimated how far this whole thing would go, so no reason to stop it now. We’re excited to get to Daytona and have a little fun with the fans before we strap in and go for the win on Saturday.”

Rewinding to the NASCAR Cup Series race at Richmond (Aug. 14), Buescher became one of the major talking points as he ran second to eventual winner Kevin Harvick for much of the closing laps, ultimately finishing third in his best career run to date at the track. During that broadcast, NASCAR Hall of Fame announcer Dale Earnhardt Jr. made multiple references to Buescher as Christopher, his full name.

Initially a misspeak, Jr. leaned into the reference and continued it throughout the end of the broadcast, a trend that gained traction and stuck on social in the days after Richmond. RFK continued the momentum by changing his name rail on the car to Christopher, and now will continue that throughout the season, at his request. Buescher himself even changed his name on Twitter to Christopher.

With a playoff spot on the line this Saturday night (7 p.m. ET, NBC), Buescher will be through the campgrounds Friday afternoon ahead of single-car qualifying. Stay tuned to RFK’s social channels for updates on timing, with the takeover expected to be sometime around 3 p.m. ET in Daytona Beach.

Buescher will pilot the No. 17 Fifth Third Bank Ford Saturday night in the regular-season finale, and is one of 14 drivers needing a win to secure the final position in the 2022 playoff field.