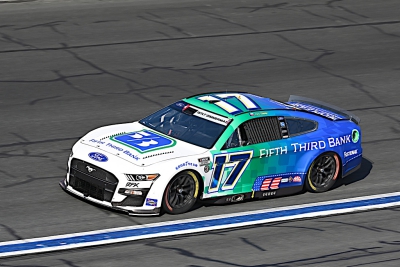 QUOTE WORTHY
Buescher on racing at Daytona:
“This race is going to be chaos no matter how you look at it. I don’t know if we’ve ever seen this scenario play out with so many guys still eligible and all needing a win, so this week will be more about survival than ever. We’re very confident in our Superspeedway program and know we’ll unload a great Fifth Third Bank Ford this weekend, we just hope all the pieces fall our way to get the win and push us into the playoffs.”

Last Time Out
Buescher carded his fourth-straight top-10 on a road course and eighth overall of the season, finishing ninth last Sunday at Watkins Glen.

Fifth Third makes its fourth appearance as the primary on the No. 17 this weekend. Fresh off celebrating its 10th season as a partner with RFK in 2021, Fifth Third returns this season for five races in total, while serving as an associate in all events for the No. 17 team.

The bank will also feature Summit Racing this weekend on the decklid of the No. 17 machine as part of the Fueled by Fifth Third pass-through program.