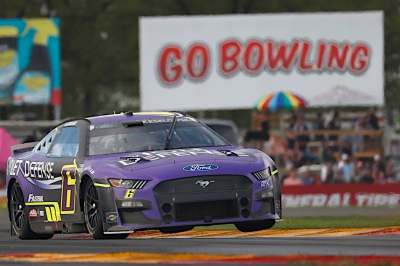 In a race that began in the rain with slick conditions at Watkins Glen, Brad Keselowski drove his Violet Defense Ford Mustang to a 19th-place finish.

Keselowski put together a qualifying effort of 15th on Saturday, his third-straight top-15 qualifying effort on a road course. After lightning and rain delayed the initial start, the field eventually got rolling in light rain as the skies cleared.

The Michigan native initially stayed on track longer than most with the rain tires, ultimately hitting pit road at lap 14 to switch to slicks. He went on to finish the 20-lap stage in 20th.

After rolling off 29th for stage two, Keselowski worked his way through the field in all green conditions to finish 20th at the end of the segment, setting up the final, 45-lap run to the finish. He rolled off 16th, and shuffled between there and 20th in the closing laps to ultimately bring home a 19th-place result.

The No. 6 team heads to Daytona International Speedway next weekend as the final opportunity to advance into the NASCAR Playoffs. Race coverage next Saturday night is set for 7 p.m. ET on NBC, MRN and SiriusXM NASCAR Radio.