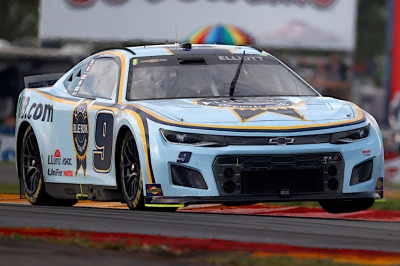 While one race still remains to complete the NASCAR Cup Series (NCS) playoff field, Chase Elliott is one step closer to battling for his second championship title in NASCAR’s premier series. At the track that delivered Elliott his first career NCS win in 2018, the 26-year-old Hendrick Motorsports driver is leaving Watkins Glen International as the 2022 NCS Regular Season Champion. A familiar face on top of the points standings through most of the season, Elliott entered the race weekend with a strong 116-point lead over second-place Ryan Blaney. Only needing a 61-point advantage at the end of upstate New York race weekend, Elliott was able to clinch the coveted NCS Regular Season Championship title one week early.

“Congratulations to Chase Elliott and the entire No. 9 Camaro ZL1 team on winning the NASCAR Cup Series regular-season championship,” said Jim Campbell, Chevrolet U.S. Vice President, Performance and Motorsports. “He has delivered consistent results all season. Chase, crew chief Alan Gustafson and the No. 9 Hendrick Motorsports crew are working together as one team, as they build momentum heading into the playoffs.”

Elliott and the No. 9 Hendrick Motorsports Camaro ZL1 team has proven to be a championship contender throughout arguably one of the most unpredictable seasons in NASCAR history. In 25 races thus far, Elliott leads the series in wins with four, top-10 finishes (17), laps led (688) and accumulated playoff points (25). While his first win of 2022 at Dover Motor Speedway solidified his berth into the NCS playoff field, it was the summer stretch that the No. 9 Hendrick Motorsports Camaro ZL1 team became a championship threat. Elliott drove to a career-best and series-best streak of five consecutive top-two finishes, which began with his victory at Nashville Superspeedway (June 26, 2022). Within that time span, the 2020 NCS Champion collected three victories and two runner-up finishes, setting the Chevrolet driver up to cruise towards his first NCS Regular Season Championship in his seventh full-time season in the series.

The 2022 regular season for NASCAR’s premier series will come to a close next weekend with the Coke Zero Sugar 400 at Daytona International Speedway. Under the lights on Saturday, August 27, the famed 2.5-mile Florida superspeedway will officially set the 16-driver NCS playoff field. Live coverage of the 400-mile race can be found on NBC, the NBC Sports Gold App, MRN and SiriusXM NASCAR Radio Channel 90.