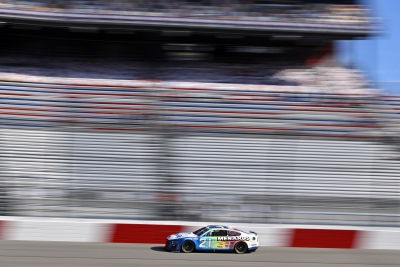 After an encouraging practice session, Harrison Burton and the No. 21 Menards/Dutch Boy Mustang will have to start Sunday’s 65th annual Federated Auto Parts 400 at Richmond Raceway from the rear of the pack.

The Menards/Dutch Boy team showed good speed in Saturday’s practice session. Burton posted the 12th-fastest time in the session. His best lap, at 115.276 miles per hour, came on the third of the 47 laps he ran.

He was eighth fastest among drivers who ran 10 consecutive laps, averaging 114.089 mph over the first 10 laps he ran in the session. He and Ford teammate Joey Logano ran the most laps of any drivers in practice.

During the qualifying, Burton was one of the first drivers out on a track that significantly picked up speed as the session went on. He wound up 30th with lap at 113.900 mph, but there was an issue with the car’s master switch.

The Menards/Dutch Boy team plans to replace the switch prior to the start of the race. That’s considered an unapproved adjustment, and therefore the team will be sent to the back of the starting field.

Stage breaks are scheduled for Laps 70 and 230.