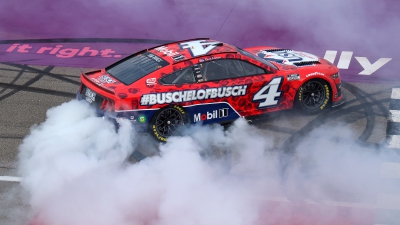 Kevin Harvick (No. 4 Ford Mustang for Stewart Haas Racing) burning it down in front of the Michigan fans who waited out a weather delay earlier in the day to see one of NASCAR’s veteran drivers get back into his winning ways. This years race at Michigan had its best attendance since 2016 and had the infield camping sold out for the first time since 2012. It also proved to be one of the better races this season thanks to the new NextGen cars NASCAR introduced this season. Getty Images

With 14 drivers locked into the 2022 NASCAR playoffs and with only four races left in the regular season, Kevin Harvick had to win to be in contingency to win this year's NASCAR Championship at Phoenix this November. He did exactly that by winning Sunday's Firekeepers Casino 400 at Michigan International Speedway.

Harvick, referring to his 59th Cup Series win, said to the media, “It means a lot. As we went through the first part of the season and really not having everything where we wanted to be and we just really just kept our heads down and just kept communicating and working and working through what we thought our weak points were. So today it just — we didn’t have anything work against us. That’s the biggest thing that happened today. Pocono and Loudon kind of in the same position and just didn’t have the end of it go right, and today it went our way. We were in position to capitalize on it.”

While Harvick was the one who pulled into victory lane in the Irish Hills of Michigan, he was one of many drivers who looked like they were in contention to win the race. Fifteen drivers led at least one lap in the 400 mile event at Michigan International Speedway, and the race had seven cautions causing 36 of the 200 laps to run under the yellow flag condition.

The first caution of the day came out on lap 21 for the competition caution with Wallace leading. Then shortly later on the restart, JJ Yeley caused a pileup on lap 26 that took out big named contenders like Kyle Busch, Austin Cindric, Aric Almirola, Ricky Stenhouse Jr., and many more. The end of stage one was the reason for the third yellow of the day, with Bell being the first person to cross the line. On lap 99, Cole Custer had a fire break out in his racecar that essentially ended his day which was the reason for the fourth yellow.

On lap 110, Noah Gragson who was driving part time for Kaulig Racing, had an accident on the back straightaway that ruined his great run after being in the top 10 for most of the day. Stage two brought out the sixth yellow flag of the day, where Denny Hamlin won 10 points and one playoff point to help him out. Finally, on lap 161, Bell and Ross Chastain brought out the final caution of the day, where Bell made a bad block battling for the lead,and ended up in the garage at the end of the day. By leading the final 38 laps and being in the top 10 all day, Harvick cruised to victory for the first time since his nine win season back in 2020.

Overall, the race took two hours, 54 minutes, and eight seconds to complete, with an hour rain delay before the start of the event. The average speed of the race was 137.825 mph with a 2.903 second margin of victory between Harvick and second place Bubba Wallace. Next week, the NASCAR Cup Series will take on 400 laps and 300 miles at Richmond Raceway in Richmond, Va., for the Federated Auto Parts 400. The race will start at 3 p.m. Eastern and will be on USA, MRN, and SiriusXM NASCAR Radio.