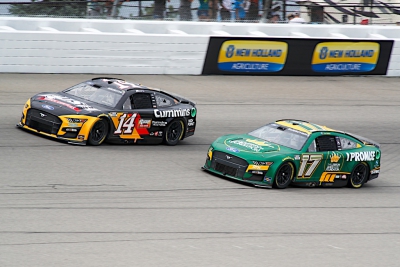 Chris Buescher’s LeBron James Family Foundation Ford was at the front early and often Sunday afternoon at Michigan International Speedway before he went on to finish 16th in the 200-lap race.

After rolling off 19th in a race delayed by rain, Buescher and the No. 17 team used early strategy to stay out under a competition caution at lap 20, setting him up with solid track position for the run to the stage one finish. Buescher fired off eighth at lap 24 and held his own, ultimately gaining positions to a P5 finish to end the opening segment at lap 45.

With a green flag run of 46 laps dominating the start of stage two, the team again employed strategy by staying out on track for the duration and found themselves in second when a caution was displayed at lap 97. He went on finish 18th in the stage after pitting twice.

He began the third stage from 10th after again staying out under the final stage break, then got caught a lap down during a green-flag pit sequence at lap 159 under the final pit sequence of the day. After taking the wave, he restarted 22nd for the final green flag and went on to pick off multiple positions to finish 16th.