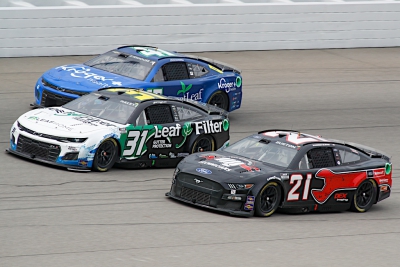 A week after posting a career-best third-place finish at Indianapolis Motor Speedway, Harrison Burton was involved in an early multi-car crash at Michigan International Speedway that resulted in a 32nd-place finish.

He was running 30th when the Competition Caution flag flew at Lap 20. The caution period allowed the Motorcraft/Quick Lane crew to make adjustments to the No. 21 Mustang, and Burton rejoined the race in 33rd place.

On the restart a wreck began ahead of him.

Burton’s No. 21 Mustang was tagged in the ensuing melee. While the contact didn’t initially appear to be race-ending, damage to the steering system put the Motorcraft/Quick Lane team out of the race.

“I couldn’t really see much of what happened,” Burton told reporters. “I really didn’t hit anything hard.

“I guess we just broke a part in the steering rack or something, but I couldn’t steer the car.” He concluded that he wasn’t going to be able to make minimum speed and that it was too dangerous to try.

“I felt like we weren’t really that good to start, but I knew we had some good changes coming I was excited for,” Burton said. “We fired up on that last restart and through [Turns] One and Two I thought I was going to gain a lot of spots and then, all of a sudden, the world came crashing in. It’s just a bummer, but we’ll keep pushing on.”

Eddie Wood said that while the on-track results weren’t what anyone on the team wanted, the day was a success in many ways.

He and his fellow team members got to spend time with the 20-year Senior Master Technicians that attended the race and with Ford executives including CEO Jim Farley and Edsel Ford.

“I hate that we didn’t have a better finish for all our guests,” Wood said. “Their support means everything to us.

“It was good that a Ford won the race and that Ford Motor Company got the Michigan Heritage Trophy and the bragging rights that go with it.”

Wood, Burton and the No. 21 team now turn their attention to the 400 lapper at Richmond Raceway on Aug. 14.