Gilliland Back with Cornerstone Partner at Michigan 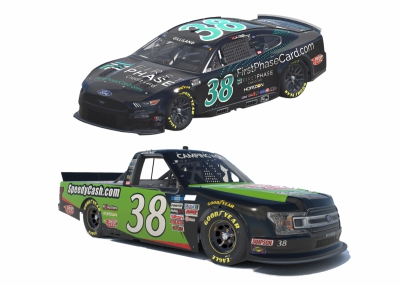 Todd Gilliland and anchor partner, First Phase, reunite this weekend at the Michigan International Speedway. The 400-mile event will be Gilliland’s first race in a NASCAR Cup Series car at the track, but it is a track he is confident he can perform due to past success. Gilliland has a top-five at the fast, wide two-mile oval in the NASCAR Camping World Truck Series.

On the No. 38 Ford Mustang for Gilliland this weekend will be First Phase, a credit card by CURO Credit, LLC, the premier partner of Gilliland’s rookie campaign.

Gilliland is ready to get to Michigan and compete.

“It is such a fun track and I’m happy to have a shot here in the Cup Series,” said Gilliland. “We are strong at these momentum-based racetracks, and Michigan falls into that category. We had speed at California Speedway earlier this season. That is a track that may be as close to Michigan we race.”

“It’s great to have First Phase back on the car this weekend,” said Gilliland. “They have put in a lot of support for my rookie season, and we want to give them a good finish. We have been working hard to try and get the most speed in these cars. We just need to keep fighting and learning. It has been challenging, but I have enjoyed it, too.”

Gilliland and the No. 38 First Phase team will race on Sunday at 3:00 p.m. ET on the USA Network.