Chaos at Indy…Reddick Makes it Through 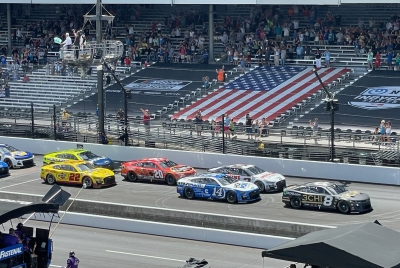 Wow! What a chaotic start to the Verizon 200 at Indianapolis Motor Speedway. The first spin out of many at IMS started on turn 1 just after the field went green. And it didn’t stop there. Turn 1 gave nearly every driver issues today. It started with Justin Haley in lap 1 and continued until the very last overtime lap. Denny Hamlin was very loose and missed a turn, but stayed on the track. And he wasn’t the only one.

Part of the problem is it was hotter on Sunday than it was on Saturday. Track temp was reported to be 25 degrees hotter. All the drivers were stating that they were having problems with grip and that they kept getting loose.

Chris Buescher pitted at Lap 11 and something on the inside of his car caught fire. His pit crew got the fire out. Reportedly, Bubba Wallace had got into his door and knocked something loose, possibly causing the fire.

Not to be outdone by the chaos on the track, the Air Force hauler brought in for the fan experience got stuck in one of the tunnels.

On one of the last restarts, Reddick had to hold off AJ Allmendinger who had been driving hard all day. Turns out that his cooling device had not been working all day and when he got out of his car, he collapsed and was taken to the care center and released.

Chase Briscoe won Stage 1. Christopher Bell won Stage 2 and Reddick did some fancy driving to hold off everyone else. Reddick has won 2 of the last 5 cup races. He sets himself up 278 points behind Chase Elliot who is in the lead heading into the shootout.