Buescher Storms Back for Top-10 after Fiery Start in Indy 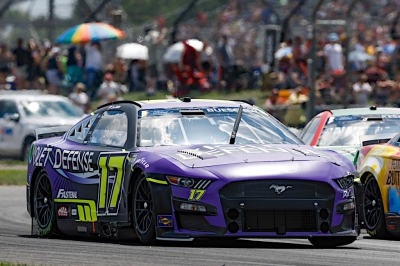 Chris Buescher had one of the more eventful top-10 finishes of the season Sunday afternoon on the road course at Indianapolis Motor Speedway, overcoming a fire inside his Violet Defense Ford and ultimately coming back from two laps down to finish 10th.

“I wasn’t giving up, this team gave me way too good of a race car today to let somebody’s stupidity take us out that early,” Buescher said. “I’m not going to make it a habit of staying inside cars that are on fire but kudos to this team for bringing such a good race car. Our Violet Defense Mustang was just fast, and we don’t have much to show for it again.”

The Texan got his day started from the 16th spot, but wasted no time charging to the front in the opening laps. He ran 12th by lap six, and in the mix of advancing through to the top-10 he received contact from the No. 23. The damage at the time wasn’t known to be too severe, but he brought the No. 17 to pit road at lap 11, and upon pit entry the car caught fire. Ultimately, the contact damaged his right-side and caused material in the door to catch fire.

As Buescher stayed put with flames inside the cockpit, the team worked tirelessly to both extinguish the flames with assistance from track safety crews, as well as cleaning the inside so his vision was clear enough to continue. After losing two laps on pit road, Buescher finished the stage in 38th.

From there, the team needed yellow flags to fall at the right time. He ended the second stage in 34th, still two laps down, then at lap 60 got one back when the caution came out during a pit cycle. On the ensuing restart, he and teammate Brad Keselowski battled for the lucky dog, and Buescher ultimately prevailed with six to go and put his Violet Defense machine back on the lead lap.

Then, a pair of late cautions sent the race to NASCAR Overtime, where Buescher initially restarted 28th, and drove through the chaos to cross the line 11th. After the No. 1 car was penalized for driving straight through turn one on the last restart, Buescher was credited with the 10th-place result.

Michigan International Speedway is next up on the Cup Series schedule, with race coverage next Sunday afternoon set for 3 p.m. ET on USA. It can also be heard on MRN and SiriusXM NASCAR Radio.