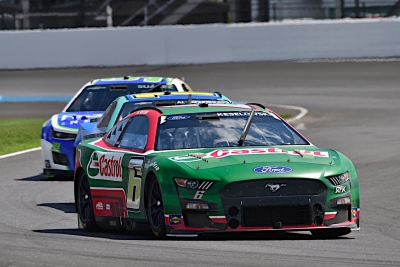 He began the day from the 12th spot after a solid qualifying effort on Saturday. The opening laps turned chaotic as multiple cars spun or left the course, including the No. 6, as Keselowski was shuffled past 25th when he spun on lap six.

He elected not to pit in the opening segment and would finish 12th, then lined up fourth on the stage two restart after again not pitting. He later hit pit road at lap 28 from the fifth spot and went on to finish the stage in 17th.

Just a lap into the final stage, Keselowski was forced to pit road for fresh tires after a spin, and was ultimately caught a lap down when the yellow came out laps later at lap 60. From there, he was in line for the lucky dog and was the recipient of it when the second of two cautions came out under five to go. He powered from the 28th position on the last restart to finish 20th.

Michigan International Speedway is next up on the Cup Series schedule, with race coverage next Sunday afternoon set for 3 p.m. ET on USA. It can also be heard on MRN and SiriusXM NASCAR Radio.