CHEVROLET NCS: Tyler Reddick to Lead the Field to the Green in Indianapolis 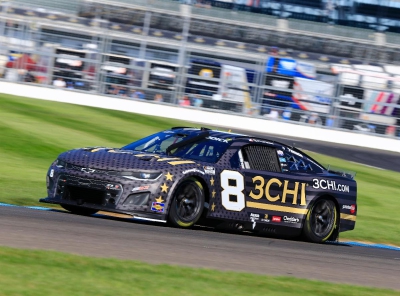 The last time the NASCAR Cup Series (NCS) turned laps on a road course circuit, Tyler Reddick drove his No. 8 Richard Childress Racing Camaro ZL1 to victory lane for the first time in his NCS career (Road America, July 2022). Today, the 26-year-old California native picked up right where he left off, capturing the pole for tomorrow’s Verizon 200 at the Brickyard at the Indianapolis Motor Speedway Road Course. Reddick laid down a lap of 88.354 seconds, at 99.378 mph, in his No. 8 3CHI Camaro ZL1 to capture his second career pole win in NASCAR’s premier series. Reddick’s pole winning lap was almost three tenths of a second faster than the second-fastest driver, proving the No. 8 3CHI Camaro ZL1 will be a strong contender to go back-to-back in road course wins.

“I could have done a better job, but it was really nice to know that we really did such a good job; everyone at RCR and the ECR power under this hood,” said Reddick. “Just this whole group on the No. 8 3CHI Chevrolet team did a really good job of preparing the last couple of weeks for this race.”

Reddick’s pole win marked the fifth for the Camaro ZL1 in 2022; and a manufacturer-leading 728th all-time in NASCAR Cup Series history. The bowtie brand has proven to be a force to be reckoned with on road course circuits, with Chevrolet currently sitting at nine consecutive NCS road course victories. A streak that started with Chase Elliott’s victory at Circuit of The Americas in March 2021, six drivers from four different Chevrolet teams have added to the Chevrolet NCS road course win count and the manufacturer looks to take that number to double digits this weekend.

NBC will broadcast the NASCAR Cup Series Verizon 200 at the Brickyard at 2:30 p.m. ET on Sunday, July 31. Live coverage can also be found on the NBCSports Gold App and SiriusXM NASCAR Radio Channel 90.

WALK US THROUGH YOUR FAST LAP OUT THERE?

“Well, it certainly seemed like a pretty good lap, but definitely not a pole lap. Right away, we were hustling to cool the car down and cool the brakes down so we could re-run. But it ended up being a good enough lap and it stood up against the nine other competitors. I definitely had a little bit of concern missing it a little bit in turn four and just a little bit in the braking zone.

I’m glad it was a good enough lap. Certainly you always try and run the perfect lap. We didn’t quite do that, but it was good enough to win the pole.”

We’ll see how tomorrow goes. We’re going to have a really good pit stall selection and have the opportunity from the start to control the race. Hopefully we’ll be able to do that and keep it up front all day.”