Erik Jones to Remain in the No. 43 Chevy With Petty Gms 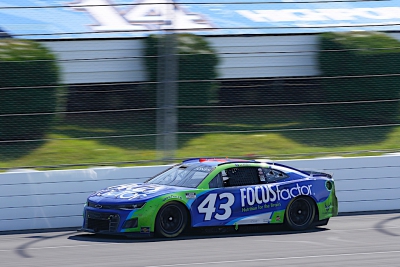 Petty GMS today announced the team and Erik Jones have agreed to a multi-year agreement for Jones to remain in the No. 43 Chevy Camaro starting with the 2023 season.

“I’m really excited to have this deal done and finally be able to talk about it,” said Jones. “I really like the group I have at Petty GMS and working with Dave (Elenz). Each week I feel like we get better and better and put ourselves in contention to win. Knowing where I’ll be driving allows us to really focus on building the team and making our cars better. I’m looking forward to finishing this season strong, hopefully with a win, and continuing to build on what we started this year with Petty GMS.”

Jones joined Richard Petty Motorsports (RPM) in 2021 and continued in the No. 43 Chevy when GMS Racing and RPM merged at the start of the 2022 season.

“Erik (Jones) has been a great addition to Petty GMS this year and we’re thrilled to have him signed for the coming years,” said Petty GMS Owner Maury Gallagher. “We’re excited to continue building our Cup program with Erik, Dave (Elenz) and the No. 43 team. They’ve shown great growth and potential this season and we know it will only continue.”

“We’ve had a great relationship with Erik (Jones) since he joined RPM and now Petty GMS,” said Petty GMS Chairman Richard Petty. “Erik’s done an outstanding job representing the No. 43 and all of the fans who love to see that car on track. It’s nice to have Erik locked in for the years to come and continue building on the legacy of the No. 43 as he continues his Cup career.