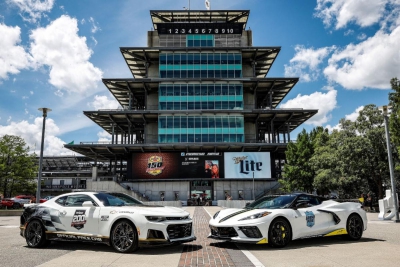 Chevrolet has a long and special history at Indianapolis Motor Speedway. The co-founder of Chevrolet, Louis Chevrolet, and his brothers competed in early races at IMS. Over 110 years later, Chevrolet teams will be competing in the NASCAR Cup, NASCAR Xfinity and INDYCAR series races at the Speedway this weekend.

“This is our home away from home, due to the special history between Chevrolet and the Indianapolis Motor Speedway,” said Jim Campbell, U.S. vice president Performance and Motorsports. “Chevrolet is the only manufacturer that will be competing with teams in NASCAR Cup, NASCAR Xfinity and INDYCAR series races at the Speedway.”

Chevrolet has won 12 of 21 NASCAR Cup Series races this season, 13 of 19 in the NASCAR Xfinity Series, and nine of 12 races in INDYCAR.

In addition, Chevrolet vehicles will pace all three races at IMS this weekend:

Chevrolet also has an extensive display of new cars, crossovers and trucks located in the Indianapolis Motor Speedway infield midway, including the all-new Silverado EV, the first-ever Silverado ZR2, Camaro ZL1 and a 2023 Corvette Z06. Also on display is the No. 5 Chevrolet Camaro ZL1 Cup car and a Chevrolet-powered INDYCAR. Chevrolet NASCAR and INDYCAR drivers will participate in Q&A sessions with fans at the display throughout the weekend.