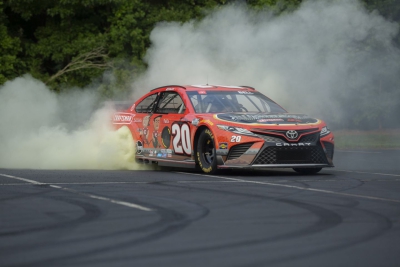 Joe Gibbs Racing announced today that Stanley Black & Decker and their iconic CRAFTSMAN® brand are reuniting with the Ace Hardware Foundation and Christopher Bell to raise funds and awareness for Children’s Miracle Network Hospitals (CMN Hospitals) through its annual Racing for a Miracle program with a special paint scheme on the No. 20 Toyota Camry TRD at Indianapolis.

As part of the annual Racing for a Miracle Program, this year, four children from Riley Children’s Health in downtown Indianapolis will enjoy a once-in-a-lifetime VIP race day experience alongside CRAFTSMAN driver Christopher Bell, serving as his honorary junior crew members. To honor his extraordinary junior crew made up of Donovan (Age 10), Callista (Age 14), Jha’Vion (Age 15) and Pablo (Age 15), Bell will run a special “8-Bit Pixel Art Gaming” paint theme on his car consisting of pixelized images of the junior crew, each reflecting a different pit crew position on the team. This special edition paint scheme will debut on Bell’s No. 20 car during the July 31 race at Indianapolis Motor Speedway – a location that holds sentimental value as it was the first city that hosted the Racing for a Miracle program back in 2007.

“This program is coming full circle as we return to Indianapolis where the magic of Racing for a Miracle first began,” said Tony Merritt, Vice President of Sponsorships for Stanley Black & Decker. “Throughout the past 16 years, it’s been incredible to witness the impact this program has had on the lives of the junior crew members, their families and those who have benefitted from receiving world-class care at CMN Hospitals across the country.”

Bell first got to be a part of CRAFTSMAN’s Racing for a Miracle program last year at Atlanta Motor Speedway.

“This is my second year getting to be a part of the Racing for a Miracle program and I’m excited to have Donovan, Jha’Vion, Callista and Pablo as honorary crew members this year in Indy,” said Bell. “CRAFTSMAN and ACE have raised a lot of money and awareness for Racing for a Miracle and Children’s Miracle Network Hospitals over the years and it’s amazing to be part of it. The car looks great, and my team and I are honored to represent such a great cause.”

On July 28, Bell and CRAFTSMAN brand ambassador, TV host and auto-enthusiast Cristy Lee, will spend time with patients at Riley Children’s and present The Ace Hardware Foundation a check from CRAFTSMAN in support of the Racing for a Miracle program. Over the past 16 years, Stanley Black & Decker and the Ace Hardware Foundation have donated more than $1.6 million to CMN hospitals around the country.

“Children’s hospitals are on the frontlines when protecting the health of future generations – but they aren’t alone,” said Teri Nestel, President & CEO of CMN Hospitals. “With generous supporters like these three companies, our member hospitals are supported and empowered to fulfill the urgent needs of their respective communities. Together, we’re changing kids’ health to change the future.”