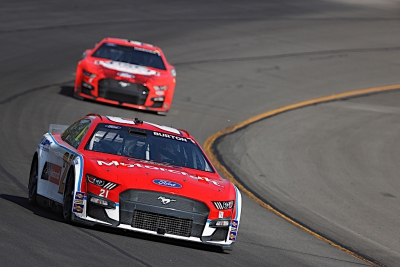 Harrison Burton and the No. 21 Motorcraft/Quick Lane team came away with a 23rd place finish on Sunday in the rookie driver’s first Cup Series start at Pocono Raceway.

He called Burton to pit road for the first time at Lap 10. Burton was working his way forward when a round of pit stops began near the end of the first Stage, a 30-lapper.

Wilson left Burton on the track through the end of the Stage, and that netted them a 13th-place finish in that segment.

Back under green, Burton raced among the top five through Lap 49 and was running 11th when he made his second pit stop at Lap 58.

He rejoined the race at the rear of the pack and worked his way back to 23rd when the second Stage ended at Lap 95.

As Wilson continue to employ pit strategies in attempts to gain track position, the No. 21 Motorcraft/Quick Lane Mustang once again climbed up the running order and was posted in second place when Burton made his final pit stop, under the green flag, with 33 laps remaining.

The caution flags that the Motorcraft/Quick Lane team needed to gain ground didn’t materialize, and Burton spent the remainder of the race running outside the top 25 – until the final lap when he drove by Noah Gragson to record his 14th top-25 finish of the season.

Burton and the Wood Brothers team now turn their attention to the July 31 Verizon 200 at the Brickyard on the road course at Indianapolis Motor Speedway.