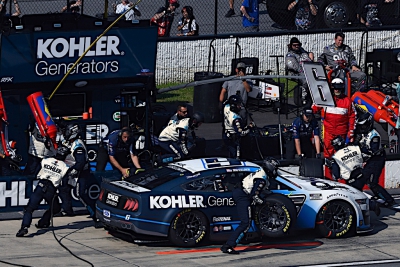 After a strong run in Loudon, the Kohler Generators team hoped for another strong run Sunday at Pocono Raceway, and turned in a solid 14th-place finish at The Tricky Triangle.

Starting 21st, Keselowski would gain six positions before the end of a short 30-lap stage one. Taking right side tires with a shock adjustment during the stage break, the No. 6 lined up 32nd for stage two.

Stage two would see four cautions prior to the stage break, finding Keselowski as high as sixth on the race track, as the team tried to formulate some strategy by going deep into a fuel run.

Unfortunately, the caution fell right after Keselowski came down pit road, as he’d be the lucky dog. The No. 6 team would gain three spots on the final restart of stage two to finish 24th.

Starting stage three from the 21st position, the No. 6 team faced at least one final pit stop needed for fuel, which came on lap 123 under green flag conditions. A caution for incident on lap 137 found Keselowski in 16th once all stops cycled through.

After coming down pit road under caution for his final stop of the day, the No. 6 battled inside the top-20 to a 16th-place result on the track.

After disqualifications of the No. 11 and No. 18 in post-race tech, Keselowski was credited with a 14th place finish.

Next up on the schedule is Indianapolis, as Sunday’s action on the road course is set for 2:30 p.m. ET on USA. Race coverage can also be heard on SiriusXM NASCAR Radio.