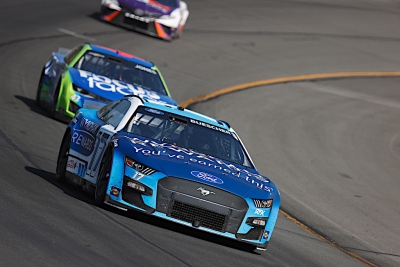 The 2016 Pocono winner put his No. 17 machine in a solid position to start the 400-mile race, qualifying fifth in Saturday’s session, his best qualifying effort to date at the track.

A flurry of early-race cautions dominated the opening stage and beyond, with a combined five yellows in the first 50 laps, and seven before lap 100. The No. 17 team elected to short-pit the opening stage of 30 laps, putting them 30th to end the segment.

With the strategy, Buescher restarted stage two in sixth, and would maintain his position for the next 15 laps as three cautions flew in a span of nine laps. Then, he pitted from the fifth spot on lap 65 when the team had unlucky trouble on the left rear, which ultimately cost him track position as he went on to end the stage in 16th.

Buescher began the final stage in 25th before spinning on the front stretch at lap 125, which ultimately caused a right-front tire to go down. He unfortunately had to limp the Wyndham Rewards machine all the way around the lengthy Tricky Triangle, putting him off the pace to the leaders. With limited cautions in the closing laps, Buescher was unable to get his laps back to finish 29th.

The NASCAR schedule heads to the road course at Indianapolis Motor Speedway next weekend. Race coverage next Sunday afternoon is set for 2:30 p.m. ET on NBC, and can also be heard on SiriusXM NASCAR Radio.