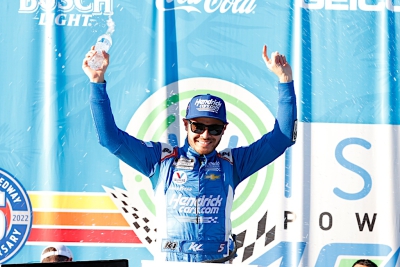 The 2022 ESPYS aired live Wednesday on ABC from the Dolby Theater in Los Angles and was hosted by NBA Champion and Finals MVP Stephen Curry. It marked the 29th edition of the awards show celebrating the best moments and figures in sports.

Larson finished the 2021 season with 10 wins (not including his triumph in the NASCAR All-Star Race), 20 top-five finishes and 26 top-10 showings, all the most among NASCAR Cup Series drivers. He is one of only 11 drivers to notch 10 or more victories in a season. He showed tremendous versatility, winning at road courses, intermediate ovals, and short tracks, highlighted by the Bristol Night Race, Coca-Cola 600 and NASCAR Championship Race at Phoenix.

NASCAR drivers who have earned the Best Driver ESPY in the past include Kyle Busch, Kevin Harvick, Martin Truex Jr. and Jimmie Johnson.

Larson takes the seat of his No. 5 Hendrick Motorsports Chevrolet next in Sunday’s M&M’s Fan Appreciation 400 at Pocono Raceway (3 p.m. ET on USA Network, MRN Radio and SiriusXM NASCAR Radio).