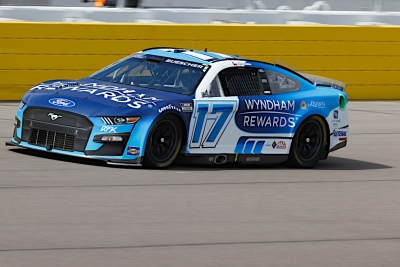 QUOTE WORTHY
Buescher on racing in Pocono:
“Pocono is obviously a special place to me. It’s called The Tricky Triangle for a reason, and it will be interesting to see how the new car reacts to it in a race format. It’s obviously a very fast race track, so it’s on us to work through everything Saturday in the Wyndham Rewards Ford, then put together an impressive run Sunday afternoon.”

Last Time Out
After running inside the top five and top-10 for much of stage two, Buescher finished 17th Sunday at Loudon.

Wyndham Rewards – who initially joined the RFK family of partners in 2018 – will be aboard the No. 17 with Chris Buescher this weekend for its second race with the No. 17 this season, and third overall. The brand has served as a primary partner for the No. 6 team the last five years, and this year serves as a primary on both RFK entries at select races.