Christopher Bell expands to 14 winners after win in Loudon Featured 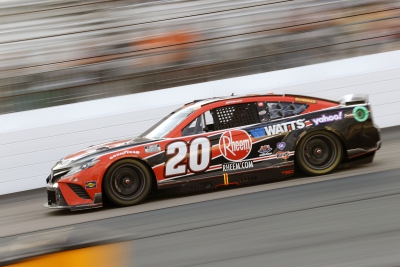 Christopher Bell (No. 20) on the charge heading to his second career win in the NASCAR Cup Series Tim Nwachukwu/Getty Images

After Christopher Bell captured the fuel mileage win at New Hampshire Motor Speedway this past Sunday afternoon, the 2022 NASCAR Cup Series Playoff field expanded to 14 different winners. Bell scored the win after leading 42 of the 301 laps offered in the Ambetter 301, for only his second win in his NASCAR Cup Series career.

“Man, that one was much needed right there,” said Bell, talking to NBC Sports after his victory celebrations. “I’ll tell you what, that was a hell of a race from my viewpoint. That was so much fun racing with the No 45, the No. 22 and the No. 9. We were all running different lines. That was a blast.”

Bell’s Joe Gibbs Racing teammate Martin Truex Jr., was the one who led the most laps with 172 starting on lap 1 through 95, and then lap 121 to lap 188. Other big name drivers like Joey Logano, Chase Elliott, Harrison Burton, Chase Briscoe, and Kurt Busch led in the 17th event of the season, making for eight lead changes.

Besides the two stage breaks and another yellow for a three car pile up from Michael McDowell, Harrison Burton,and Corey Lajoie, the rest of the cautions were due to drivers spinning out by themselves. Ryan Blaney, Todd Gilliland, Chase Briscoe, and Kyle Busch on two separate occasions, were all victims of the new Next Gen car taking on the flat mile oval in New England.

A new rivalry might have also been unleashed this weekend in Loudon, as Brad Keselowski and Austin Dillon had a war with race cars on the backstretch under the yellow flag pace laps. For reasons still unknown, Austin gave Keselowski a bump letting him know he didn’t like something Bad Brad did.

Keselowski then returned the favor more than once heading into turn three, by bumping him to the point that Dillon was in the infield grass area. The two however didn’t settle it out after the race was complete late Sunday afternoon, and some still wonder if this will carry on next weekend.

After completing the race in three hours, 14 minutes, and 45 seconds, with an average speed of 98.113 mph, the Cup Series approaches its halfway point at Pocono Raceway for the M&M’ Fan Appreciation 400. Coverage for the tricky triangle will begin at 3 p.m. Eastern on USA, MRN, and Sirius XM NASCAR Radio.