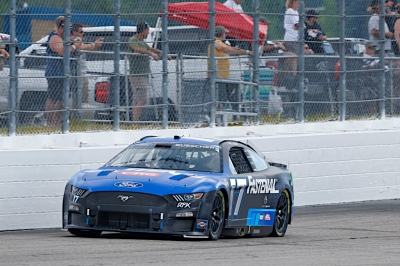 Chris Buescher put his Fastenal Ford Mustang inside the top five for a large portion of stage two in Sunday’s race from New Hampshire Motor Speedway, but faded late to finish 17th in the 301-lap race.

The Texan began the afternoon from the 16th position – his best starting spot at the short-track to date in his Cup career. From the drop of the green, the Fastenal Ford picked up two positions and settled into 14th before an early caution flew on lap four. After a restart on lap 12, the No. 17 Ford would struggle getting through the bumps in turns three and four, resulting in a 22nd place finish in stage one.

The team took a big swing at the car for stage two with a bevy of adjustments. Restarting 23rd in stage two, a couple cautions for incident would see no gain or loss in position for Buescher.

On a pit stop just shy of lap 100, the No. 17 elected to stay out, restarting on the front row. Buescher would remain in the top five for 35 laps before fading to 10th when the caution flew on lap 145. Two more cautions would fly before the end of stage two, where Buescher would finish 22nd.

The No. 17 pit crew changed the right side tires for Buescher under the stage break, putting him eighth for the final restart. Only one caution flew over the final 92 laps, where Buescher ultimately finished 17th.

The NASCAR schedule heads to Pocono next, as The Tricky Triangle hosts its annual race next Sunday. Race coverage is set for 3 p.m. ET on USA, and can also be heard on MRN and SiriusXM NASCAR Radio.