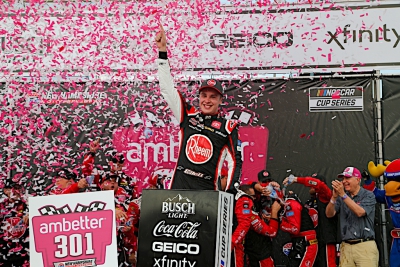 Christopher Bell has quietly established himself as a New England force over the past three years coming up the NASCAR ranks and on Sunday afternoon, he convincingly earned his biggest triumph to date there, a victory in the NASCAR Cup Series Ambetter 301 and a ticket to the 2022 Playoffs.

Bell led the last 42 laps of the 301-lapper at the one-mile New Hampshire Motor Speedway claiming the trophy – and the traditional lobster hoist in Victory Lane – with a massive 5.767-second victory over last week’s race winner Chase Elliott.

It’s only the second NASCAR Cup Series win for the third-year driver of the No. 20 Joe Gibbs Racing Toyota but oh, so significant as it launches the 27-year old Oklahoman into a guaranteed Playoff contention. The 14th different winner of the season came into the race ranked last among the top-16 drivers that would advance to the Playoffs. Now he has secured his title run.

“Man, that one was much needed right there," said Bell, who won three consecutive NASCAR Xfinity Series races at the track from 2019-2021 and was runner-up in last year’s NASCAR Cup Series race there.

“I tell you what, that was a helluva race from my viewpoint. It was so much fun racing with the 45 (Kurt Busch), the 22 (Joey Logano) and the 9 (Elliott). We were all running different lines. That was a blast. Just so happy to be here at Joe Gibbs Racing and so good to get that 20 car back in victory lane."

“Winning Cup races is hard,’’ he added with a smile, thanking the crowd. “Just seems like we’ve been close then we had fallen off a little bit last week. I was talking to my best friend and I told him, ‘earlier in the year I felt like we were right on the verge of winning. Then the last couple of weeks I felt like we were pretty far away.

Elliott, who hasn’t finished worse than second in the last four races (including two victories), said he just didn’t have anything for Bell at the very end.

“I feel like just a poor run of execution on my end in the last run,’’ said Elliott, driver of the No. 9 Hendrick Motorsports Chevrolet. “It took me a while to get past Joey (Logano) and the 45 (Busch) and I had to run harder than I wanted to.

"Just make a couple mistakes and couldn’t get much breathing room.”

The string of top-two finishes was of little consolation to the 2020 series champion.

“When you’re in position like we’ve been in, you need to finish it off.’’

Bubba Wallace, driver of the No. 23 23XI Racing Toyota, turned in a career best day at New Hampshire finishing third – his second top-five of the season but first top-10 since a 10th place at Kansas eight races ago.

“Just proud of the team, proud of myself and proud of everybody at the shop,’’ Wallace said, adding, “It’s been hell for me the last month so good to come out with a top-five.

“This sport humbles you so there’s really no surprises. Have to keep the task at hand and be mindful of your surroundings and do your job.’’

The pole sitter Truex won both stages – his series-leading sixth and seventh of the year – and led a race best 182 laps; including the first 95 consecutively to start the race.

His No 19 JGR Toyota certainly looked like the car to beat, but a two-tire stop for him – and for Harvick – with about 100 laps to go turned out to unsettle the car and he dropped briefly outside the top-10 before racing back to his fist top-five since a fifth place at Talladega, Ala. in April.

With Chastain’s 14th top-10 and Ryan Blaney’s 18th place finish, there was significant movement atop the championship standings. Chastain has moved into second place, 67 points behind the leader Elliott. Blaney – who is still looking for his first victory of the season – is now third.

Truex, who is also still racing for a Playoff-securing victory is now in the 16th and final Playoff position – 68 points ahead of Harvick, who has not won in 2022 either.