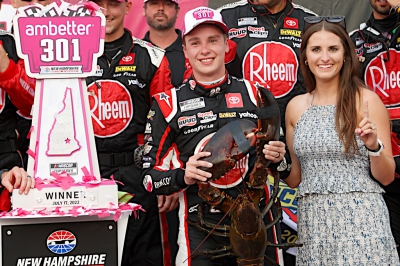 What an impressive day for Christopher Bell, Joe Gibbs Racing. He came in saying, yeah, no doubt, one of my better racetracks, and he puts himself into the 2022 playoffs in front of these New Hampshire fans. How about that? Welcome to the playoffs, Christopher.

“Man, that one was much needed right there. I'll tell you what, that was a hell of a race from my viewpoint. That was so much fun racing with the 45 (Kurt Busch), the 22 (Joey Logano) and the 9 (Chase Elliott). We were all running different lines. That was a blast. Just so happy. So happy to be here at Joe Gibbs Racing, all our partners on this No. 20 car. It's good to get Rheem back in Victory Lane.”

Coming into this race you knew you were really good at this racetrack; you said "one of my best racetracks." When you were coming to celebrate, you said, "I can't believe it." Why?

“Just looking at all the crowd, and winning Cup races is hard. You guys are awesome, thank you for coming out, but it just seems like we've been so close and then we've fallen off a little bit last week. I was talking to my best friend, and I told him, earlier in the year I felt like we were right on the verge of winning and then the last couple weeks I felt like we were pretty far away, but here we are today.”

You said you weren't super stoked about the lobster situation. Are you going to be okay with it if it means you're in the playoffs?

How do you feel after a top-three finish at New Hampshire?

“Just proud. Proud of our team, proud of myself. Staying in it there. This last month has been pretty much hell for me. A good day for our Draft Kings Toyota Camry TRD. Definitely needed this. Hats off to everybody back at the shop. Brought a decent car, I wasn’t really happy with it, but it had speed. I told myself this morning that this could be a long day and to prepare for that, but here we are.”

How much did your tires go away at the end of the race?

“It was definitely a tire management game. I kept telling myself to race the race track. Had one of the best behind me for a long time there with (Kevin) Harvick. He can mess with your mind a lot and I said, ‘Get out of here,’ I wasn’t going to let him do that and we pulled away.”

After being so dominant in the first two stages of the race, what happened in the final stage that impacted your race car?

“Just put on two tires and got in a bad spot on the restart. I got put three-wide and the 22 (Joey Logano) didn’t get going and I was on the inside behind him. I tried to shove him to get him going and get us going and (Kevin) Harvick made it three-wide and put us in a bad spot. And just my car was terrible on two tires and couldn’t go anywhere. Just should have put four tires on I guess.”

How frustrating is it to miss out on another New Hampshire win?

“We had the car to do it, we just screwed it up. It’s frustrating and disappointing, but congrats to the 20 (Christopher Bell). Obviously, they were smarter than we were at the end.”