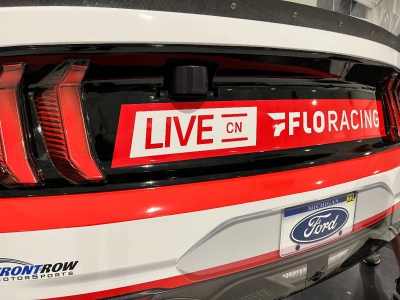 Front Row Motorsports (FRM) and FloRacing, a premiere live streaming platform for motorsports, have announced a new partnership through the remainder of the season. The new collaboration is highlighted by the popular FloRacing brand on the No. 34 Ford Mustang driven by Daytona 500 winner Michael McDowell this weekend at the one-mile New Hampshire Motor Speedway.

The partnership with FloRacing will also include ads and promotions featuring McDowell, Gilliland, and Smith later in the year on the platform that also boasts wide-ranging motorsports news, race and driver analysis and entertaining original content, to racing fans across the country and around the world. FloRacing is the home of the popular NASCAR Whelen Modified Tour as well as many other sanctioning bodies. FloRacing is part of FloSports, a leading sports streaming and original content platform featuring over 25 vertical sports categories.

“If you are a fan of any form of motorsports, you can see it on FloRacing,” said McDowell. “That is what makes the app so great. From grassroots racing to professional racing series, FloRacing delivers it all year. This is a great relationship for Front Row Motorsports and for our partners. We can also introduce people to the service, too.”

FloRacing has partnered with other premier motorsports properties and drivers, including NASCAR Cup Series Champion, Kyle Larson. They are excited for their partnership with FRM and McDowell.

“This partnership will remind racing fans that FloRacing is a premier service for them to stream live racing events throughout the year and read about the latest news of the racing they are so passionate about,” said Michael Rigsby, Vice President, Motorsports, FloSports. “Our partnership with Front Row Motorsports will also introduce many fans across our service to Michael McDowell, Todd Gilliland and Zane Smith.”

McDowell, having a career year, is riding a wave of momentum, capturing seven top-10 finishes in the last ten races. With the weekend drawing closer, McDowell is excited for his return to New England.

"We haven't had the success that we've wanted in the past at New Hampshire, but with the way we have ran this season, we hope to change that," said McDowell. "We've ran well at all different profiles of tracks this season. New Hampshire has some similarities to others, and if we continue to keep doing what we have been all season, we know we can be there at the end of the race.

McDowell and his FloRacing Ford Mustang will race at the New Hampshire Motor Speedway this Sunday, July 17 at 3:00 p.m. ET on the USA Network.