Chase Elliott wins at home, posts his third victory of the season 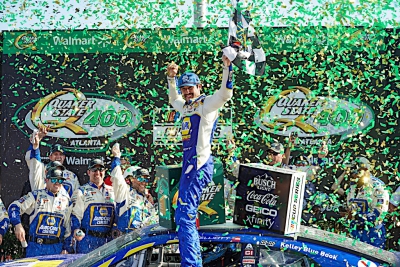 Chase Elliott is a former NASCAR Cup Series champion and currently the 2022 title leader. But finally scoring a dramatic victory Sunday afternoon at his home track – Atlanta Motor Speedway - in front of a vocal and adoring home crowd ranks right up there as far as he’s concerned.

Elliott’s No. 9 Hendrick Motorsports Chevrolet led a race best 96 of the 260 laps and held off a charging field to win Sunday’s Quaker State 400 Presented by Walmart, ultimately securing the trophy when the caution flag came out in the closing portion of the frenzied final lap.

Corey LaJoie, who was dueling it out with Elliott on that last lap, brought out that caution after hitting the wall on the backstretch in a final attempt to pull alongside and pass Elliott for what would have also been a popular first career NASCAR Cup Series victory for the well-liked LaJoie.

“This one’s up there for sure, to win at your home track is a real big deal I think to any race car driver,’’ said Elliott, 26, of nearby Dawsonville, Ga. “I watched a lot of guys do it over the years, Jimmie [Johnson] out in California. We haven’t really had a very good run here, so I felt like today was a good opportunity for us.

“I’m just so proud. This is obviously home for me and home to a lot of great fans who made a lot of noise today. Couldn’t be more proud of our team.”

Obviously disappointed not to earn the victory, but not disheartened, LaJoie said he was encouraged by the No. 7 Spire Motorsports Chevrolet team’s work on Sunday and boosted by the confidence of being in position to win late in a race.

“Closest I’ve ever been, for sure that was fun’’ LaJoie said. “I’m proud of my guys at Spire and everyone whose helped us out.

“I made my move and it didn’t work out, and the siren is ringing in Dawsonville (Ga.) unfortunately,’’ LaJoie said referencing the famed Dawsonville (Ga.) Pool Room where the owners ring a bell to celebrate each of Elliott’s victories.

With 27 lead changes among 12 drivers and 13 caution periods, it was an eventful day on the newly reconfigured and re-paved Atlanta Motor Speedway’s 1.54-mile track. And there was plenty of drama from the hometown kid winning his series-best third race of the year to several dust-ups among popular drivers.

Ross Chastain, who had a busy day on track and was part of a couple of those incidents, rallied to finish runner-up to Elliott.

“I hated that I took the best car here and I tore it up a couple times, but yeah, it’s incredible,’’ Chastain said of rebounding to score his fifth top two finish of the season.

“Hats off to Chevrolet and Trackhouse for bringing this fast of a Jockey Chevrolet to be able to come back.  Our road crew and pit crew did an awesome job to rebound through all the damage repair and we had a shot and I got inside of the 9 [Elliott] coming off [turn] 2 coming to the checkered and the caution came out.”

After being collected in a nine-car accident just before the race’s mid-point, Chastain worked his way forward again only to make contact with veteran Joe Gibbs Racing driver Denny Hamlin as the two were running in the top 10 late in the race. The pair have had run-ins previously this season and Hamlin, whose car was badly damaged, was not happy after the race.

“Everyone has different tolerance levels and as you all know, I’ve reached my peak,’’ Hamlin said.

With the victory, Elliott extended his championship lead over Blaney to 47 points. Chastain is now third, 50 points behind Elliott.