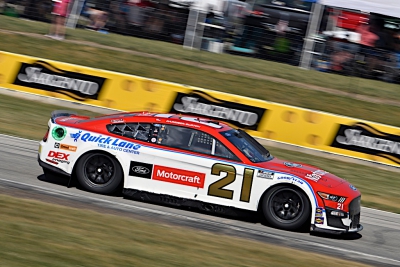 With half of the 36-race Cup Series season in the books the elite NASCAR circuit heads to Atlanta Motor Speedway this weekend to start a second trip around the circuit.

For many years in the past, the first return trip of the season was to the superspeedway in Daytona Beach, but with the schedule changes that distinction now goes to the Quaker State 400 at Atlanta.

With the offseason changes at Atlanta, the second stop will share some characteristics with the old days. The reconfigured and repaved 1.5-mile quad-oval at Atlanta, with its higher banking and narrower track in places, now sees pack racing and other similarities to events at Daytona and Talladega.

Brian Wilson, crew chief of the No. 21 Freightliner Mustang, is among those ready to get to Atlanta and kick off the second half of the season.

“Atlanta offers a unique challenge that everyone on the Wood Brothers’ No. 21 car is excited about as we start the second half of the season,” Wilson said. “The recently reconfigured race track is a blend of superspeedway racing like Daytona and Talladega, but also has some handling aspects similar to other intermediates.”

Wilson said he and his rookie driver, Harrison Burton, are glad to be going back to Atlanta and some other familiar places.

“Personally I look forward to returning to tracks a second time this year as we’ll have more depth in our notebook,” he said. “Recently at intermediate tracks we’ve made gains in giving Harrison the handling that he’s looking for.

“We’ll apply some of that knowledge this weekend.”

Wilson said having laps on the tracks in a Cup car earlier this season will help Burton going forward.

“Harrison also has a deeper notebook this time around,” he said. “He can have confidence in what he’s asking from the car and what to expect in the race.”

There will be no pre-race practice this weekend at Atlanta.

USA Network will carry the TV coverage this weekend.