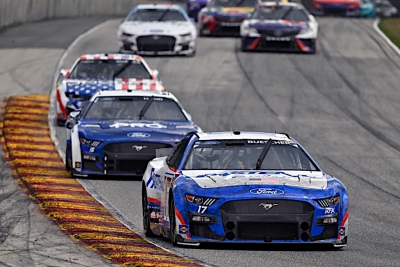 Chris Buescher scored his fifth top-10 of the season and second-straight on a road course, driving to a sixth-place run in the Fastenal Ford Mustang Sunday afternoon at Road America.

“I am proud of the effort of everybody through this week,” Buescher said. “We had a lot of speed off the truck again. We are just looking for a little bit more. It is a good thing to be running up front and be that close and try and find a squeak more of speed. It’s so tight up here and that is a good thing. We are going to stay after it and we’ll be ready for the next one.”

The 62-lap race ran caution free – minus stage breaks – as Buescher had a solid view to start the day, rolling off seventh thanks to a qualifying effort on Saturday that saw him notch his fifth top-10 start of the season.

With the opening two stages set for 15 laps, and the final at 32, similar strategies were employed through the first half of the race. Crew chief Scott Graves called Buescher to pit road early at the end of both stages, short-pitting the break to set up track position for the ensuing stage restarts.

That strategy paid off to close the first stage as he finished the green-checkered 15 laps in 17th, then restarted sixth. He would pit again at lap 27, just prior to the stage two end, and went on to restart 17th.

From there, just one green-flag stop separated the field from the checkered flag, as Buescher’s came at lap 42. He went on to pick off multiple positions in the closing laps to secure the top-10.

The Cup Series returns to action next weekend at Atlanta Motor Speedway. Race coverage Sunday afternoon is set for 3 p.m. ET on USA Network, and can also be heard on PRN and SiriusXM NASCAR Radio.