Kyle Busch Hitting the ‘Road’ For Fourth of July Weekend 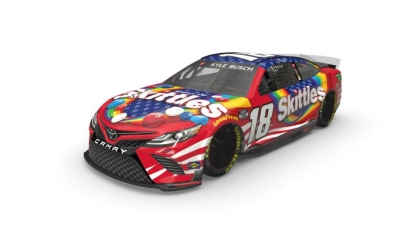 With Independence Day coming up on Monday, many Americans will be celebrating by hitting the road to spend outdoor time with family and friends over the holiday weekend.

Kyle Busch, driver of the No. 18 Skittles America Mix Toyota Camry for Joe Gibbs Racing (JGR), will also be hitting the road, but one of a different sort this Fourth of July weekend, The two-time NASCAR Cup Series champion heads to Wisconsin as the series returns to the 4.048-mile, 14-turn Road America circuit in Elkhart Lake for Sunday’s Kwik Trip 250.

Not long ago, road-course racing in NASCAR’s top series consisted of just two stops of the 36-race schedule with its yearly visits to Sonoma (Calif.) Raceway and Watkins Glen (N.Y.) International. An annual trip to the Charlotte (N.C.) Motor Speedway Roval was added to the schedule in 2018. Now, road-course racing has taken on even more importance in the Cup Series with the recent additions of Road America, Circuit of the Americas in Austin, Texas, and the Indianapolis Motor Speedway road course joining the traditional stops at Sonoma, Watkins Glen and the Charlotte Roval. With those additions, it’s more important than ever to have a strong driver and team that can turn left and right.

To help mark America’s Independence Day celebration this weekend, Busch’s No. 18 Toyota will feature the Skittles America Mix scheme. Each bag of Skittles America Mix contains a fun, fruit-flavored and patriotic mix of red, white and blue candies. The patriotic-themed Skittles are a must-have for celebrating this weekend – and of course, a great snack while watching a Cup Series race. They’re available at retailers nationwide through the summer.

So as Busch heads to Road America this holiday weekend, he’ll get right to work in hopes of adding to his impressive road-course statistics by taking a special road trip, so to speak, straight to victory lane.