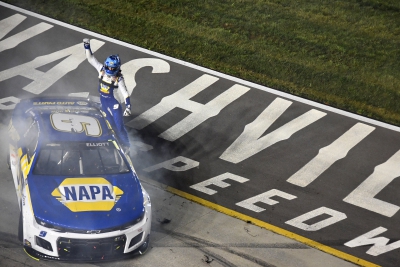 Chase Elliott (No. 9) celebrating on the start/finish line at Nashville Superspeedway late Sunday evening after scoring his second win in 2022. Elliott last won at Dover Motor Speedway in Dover, Del., and now has the championship point lead while heading to Road America this Fourth of July weekend. Logan Riely/Getty Images

After nearly three hours worth of rain/lightning delays in Lebanon, Tenn., at the Nashville Superspeedway, Chase Elliott in his #9 Chevy Camaro for Hendrick Motorsports in the NASCAR Cup Series interrupted Joe Gibbs Racing’s dominant race at the Music City, and won himself the famous Gibson Guitar trophy. “We’ve had a pretty rough month and a half,” said Elliott on the frontretch of Nashville Superspeedway talking to Marty Snyder of NBC Sports. “So just nice to get back going the right direction. Getting a win is always huge. To do it in a really cool city like Nashville is even better. Looking forward to that guitar.”

While one of the four Hendrick Motorsports ended up having a good night, the three other bowtie drivers wished that their weekend in Tennessee had turned out better. Alex Bowman (Who drove the sponsor , William Byron, and defending race winner from last year at Nashville Kyle Larson all had issues at some point in the race. Bowman (carrying the race sponsor Ally on his Camaro) and Byron finished 36th and 35th respectively, while Larson rebounded after a pit road speeding penalty to finish in fourth.

Rain was the name of the game for the Ally 400, as the race was stopped on lap 41 after lightning struck near the facility and halted the race for just over an hour. Then the race went back to green, until lap 140 when a pop up thunderstorm drilled the 1.333 mile superspeedway with lightning, heavy rain, and powerful winds. It wasn’t until around 10 p.m. Eastern that the track was finally dried enough to have cars back on the speedway. They finally restarted the race, just 10 laps shy from the halfway mark to call the race official.

As previously mentioned, Joe Gibbs Racing in their Toyota Camry’s dominated the majority of the 300 laps at Nashville, but lost the lead when the final caution came out in the evening on lap 293. Martin Truex Jr., Kyle Busch, and Denny Hamlin dove down into pit road to take on new tires and fuel, while the eventual race winner Elliott, Kurt Busch, and Ryan Blaney (who spun earlier in the event after having a loose race car) stayed out on the racetrack, and finished in that order in the race.

Kyle Busch wanted to stay out of the pits, but crew chief for the #18 car Ben Beshore convinced Kyle that taking two tires would be the right move. The cars who stayed out made it much tougher to pass to try to contend for the win, and Kyle was visibly upset about the call that was made on top of the pit box.

After his second win of the year, Elliott takes over the lead in the points standings over the #1 of Ross Chastain. Next week, both the NASCAR Cup and Xfinity Series take on the four mile road course of Road America in Elkhart Lake, Wis. Elliott, in his seventh year in NASCAR's top series,  looks to be a contender there as seven of his 15 career wins have been on road courses. The NASCAR Xfinity Series in the Henry 180 will begin on Saturday, July 2nd, at 2:30 p.m. Eastern. The NASCAR Cup Series will race the Kwik Trip 250 on Sunday, July 3rd, at 3 p.m. Eatsern. Both races will be carried live on USA, MRN, and SiriusXM NASCAR Radio.