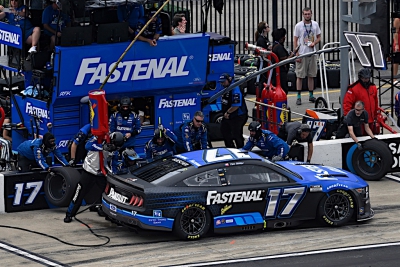 A top-10 was in sight for Chris Buescher and the No. 17 team Sunday at Nashville Superspeedway, but a lost wheel relegated him to a 30th-place finish in the Fastenal Ford.

The 300-lap race was dominated by weather delays, as spotty thunderstorms in the area forced delays of combined three-plus hours. It began on time, just after 5 p.m. ET, but did not see the checkered flag drop until nearly midnight ET.

After a qualifying effort of 15th, Buescher put his Mustang just outside and ultimately in the top-10 early. The first weather delay would come with 41 laps complete, when lightning in the distance paused all action for roughly an hour.

Buescher ran 10th at the time of that delay, and maintained the position in the top-10 for a few laps. He went on to end the first stage in 14th, and would restart the second from the same position. Then, lightning and rain moved in again, this time soaking the racing surface, at lap 124.

The race again resumed just past 9 p.m. CT and from there ran to the end, with track conditions vastly different from the near 100-degree heat the race started in. Buescher took the restart in eighth at lap 150 and would end the stage in 11th.

He began the final segment in 10th, then after some pit strategy stayed on track under a yellow just past lap 200, putting him seventh on the ensuing restart. From there, a lengthy green-flag run played out with the No. 17 team being one of the first to pit road at lap 250 from the ninth spot. But, just laps after stopping for service, Buescher’s right rear came off, bringing out the yellow and forcing him to pit road.

The mishap ultimately put the Fastenal machine two laps off the pace, a deficit too tall to overcome with limited laps remaining. He went on to finish 30th.

The Cup Series returns to action next weekend at Road America with coverage set for 3 p.m. ET on USA, MRN, and SiriusXM NASCAR Radio.