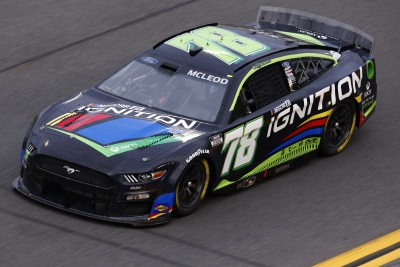 B.J. McLeod, age 38, has a total of 300 career starts across NASCAR’s Cup, Xfinity, and Truck Series’, with only one top 10 in that span. Many fans consider him a backmarker, or ignore him completely since he runs in the back most of the time. Despite that, he runs multiple teams, including LiveFast Motorsports, which fields the no. 78 Ford Mustang in the NASCAR Cup Series. McLeod co-owns that team with Joe Falk and former driver Matt Tifft, and he drives the no. 78 in a majority of the races on the Cup Series schedule.

LiveFast began in 2020, and the team turned their first laps in Daytona in 2021. While they may not be competing for wins yet, LiveFast and owner McLeod are optimistic that they have a long-term place in the sport- thanks in large part to the new NextGen car.

NASCAR’s Generation 7 “NextGen” car was heralded for being a cost-saving opportunity during its development and lead up to its release. Designed to feature a nearly spec chassis and body- teams would buy the parts directly from their choice manufacturer (Chevrolet, Ford, or Toyota)- the car was purpose-built to cut down on manufacturing costs for race teams, as well as scale back the amount of parts needed to repair. The car was also designed to produce better racing on track. McLeod confirmed that the plans for high quality racing have been realized.

“It's done more than live up to its expectations. NASCAR took a big chance. All the people in NASCAR and the team owners and the drivers and everybody took a big chance with this Next Gen car and it has done nothing but exceed 10 times over with some of the best racing we've ever seen.”

Despite these promises by NASCAR, there hasn’t been much evidence or confirmation that the plans for the NextGen’s financial impact holds true. McLeod says it has done what it was intended to, despite the obviously high upfront costs that come with a complete overhaul of race car design.

“It's a ton of upfront costs, but part of that is to just be said because we are at the highest level of stock car racing in the world, so we have to be ready to take that on as owners and and look towards the future and betterment of the sport and the budget for the car is absolutely better than Gen 6 or anything we've seen with before.”

McLeod thinks that the other main point of the car, to level the playing field, has also been achieved.

“You've already seen teams be able to win this year that didn't have a chance last year,” B.J. McLeod said. “You've already seen people run in the top 10 this year that couldn't run in the top 20 last year, even for a team as small as Live Fast, it's helped us be closer to where we want to be. Like last year, you look at California- we didn't run it in 2020, but I've ran there before. I think 2019 was my last time there and I was eight or nine laps down and this year we finished on the lead lap. Vegas, I think we were two laps down and that's 'cause I was a little bit, you know, extra courteous with the leaders, didn't want to mess up the race and lost an extra lap just getting out of the way. Gateway we were one lap down. You go back to 2020, we had very few races that we were just one lap down so it has done more than exceed expectations across the board.”

As an owner, McLeod sees into the day-to-day operations of his Cup Series team, including the parts and inventory. Early in the 2022 season, concerns were common that there weren’t enough parts for the NextGen car to go around- concerns that have since quieted down, but were never completely resolved. The owner of the no. 78 Ford Mustang confirmed that parts are much easier to come by now.

“It's part of being smart and proactive, and making sure that everything is covered and we've definitely been able to get what we need to be there and be secure,” he said. “And I think for taking on, post COVID, this kind of major switchover for a sport they couldn't have done any better.”

McLeod has big plans for the team even though they’re not a well-known powerhouse like Joe Gibbs Racing or Team Penske.

“The long term plan is to win a race without a doubt, right?” he said. “Like, the most important part is to be competitive week in and week out. And it's going to take a lot of time for us to build our team up to that.”

Despite entering the sport recently, McLeod sees a strong potential for his Cup Series team to become a competitive organization.

“Right now we're already happy with some of the results we've had this year,” B.J. McLeod said. “We’re very, very pleased with, like I said, more competitive finishes and having a little bit more speed on track than before. We have a lot of stuff that we want to clean up and make better and that just happens with prep every single week and also taking care of our partners and building that and getting that better year after year and just building up funding to be able to compete. So, it's a long road, but we're hunkered down and ready to go and just looking forward to working towards making that.”

The NextGen car has helped cut costs and level the playing field. For B.J. McLeod and LiveFast Motorsports, it’s been a boon for their small team’s growth. Though relatively new to NASCAR, they are continually improving with each race they run, and have a bright future ahead.

Ethan Miller is 17 years old and resides in Pennsylvania. He aspires to become a sports writer following high school, and views writing for Speedway Digest as the next step towards a career in journalism. Ethan currently hosts the QuickPitPodcast with a few fellow NASCAR fans, which can be found on all major podcast platforms.