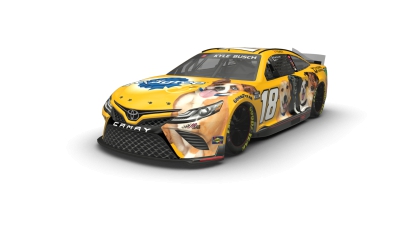 With the NASCAR Cup Series coming out its only off weekend of the 36-race schedule, Kyle Busch is looking to continue – even improve upon – his already strong performance this season during the second half of the year.

Busch, driver of the No. 18 PEDIGREE Toyota Camry for Joe Gibbs Racing (JGR), has brought home six top-five, and 11 top-10 finishes over the first 16 races and finds himself very much in the running for the regular-season championship. He sits 23 points behind series leader Chase Elliott with 10 races to go before the playoffs commence.

In addition to his win on the dirt at Bristol (Tenn.) Motor Speedway, the Las Vegas native was just an untimely caution flag away from bringing home two more wins at both his hometown Las Vegas Motor Speedway in March and at World Wide Technology Raceway near St. Louis earlier this month.

The two-time Cup Series champion now looks to start the second half of the season with a win at a place where he has an extensive racing and winning history – the 1.333-mile concrete oval at Nashville (Tenn.) Superspeedway. Busch competed in three different series at Nashville – NASCAR’s Xfinity Series and Camping World Truck Series, and the ARCA Menards Series. He made his Nashville debut in 2003 in his only ARCA start there and brought home the victory. He was also two-for-two in both his Truck Series starts, both wins coming from the pole in 2010 and 2011. The 2010 win also happened to be the first victory for his own Kyle Busch Motorsports (KBM) team.

Busch has the most experience at Nashville in the Xfinity Series, having started 10 races there from 2004 through 2011 that netted a 2009 victory and four top-five finishes. He added a start and an Xfinity Series win in NASCAR’s return to Nashville last season.

In addition to the vast Nashville Superspeedway experience on Busch’s resume, Busch and the No. 18 team have another chance to experience the homecoming of sorts for primary sponsor PEDIGREE®, whose Nashville-area headquarters are just up the road from the track. Busch will visit the facility prior to the race weekend.

The PEDIGREE brand and PEDIGREE Foundation are once again joining forces with Busch and the No. 18 team to spotlight pet adoption and support Mars Petcare’s global ambition to end pet homelessness. Busch’s PEDIGREE paint scheme will feature adoptable dogs and an “Adopt Me” call to action. As part of this collaboration, Mars Petcare, the PEDIGREE brand and PEDIGREE Foundation will host adoption events in Nashville during race weekend, covering all adoption fees at participating shelters for pets that find loving homes from June 24-26.

Participating shelters include Williamson County Animal Center and Nashville Humane Association. Courtesy of Mars Petcare, the PEDIGREE brand, and PEDIGREE Foundation, each adopter will receive a starter kit for the new furry family member that includes food, treats and pet supplies, such as a portable bowl and waste bags.

So as Busch heads to Nashville, he’s hoping to keep the momentum going from a strong first half of the Cup Series season and bring home his first Cup Series win at the tricky concrete track in his next doggone visit to Music City.