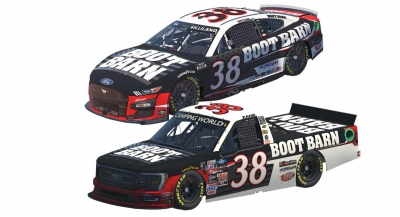 Boot Barn, the largest western and workwear retailer in the United States, continues its partnership with Todd Gilliland this weekend in Music City. Boot Barn will once again adorn the No. 38 Front Row Motorsports (FRM) team as they will race at the Nashville Superspeedway. For Gilliland, it’s a fun weekend for which he is ready.

“Who doesn’t love NASCAR, a little country music, and Nashville?” asked Gilliland. “This is one of the most fun weekends of the season. Everyone loves to come to Nashville, dress up, go down Broadway Street and take in the sights and sounds. NASCAR and Nashville just go together. It’s an awesome time.”

Gilliland, who recently took in a Morgan Wallen concert, loves the common music interests of Nashville and NASCAR fans.

“I love all types of music, from hip hop to country music, but when you come to Nashville you have to go out and take in the country music - it’s everywhere. You see so many fans in the city having a good time and NASCAR fans really turn out for this race. You get excited to see that and you want to go in, take in the music and meet the fans.”

Looking good is also a big part of the electric atmosphere in Nashville. For Gilliland, he has Boot Barn ready to take care of that for him.

“You can’t go out in Nashville without looking your best,” continued Gilliland. “I am lucky because Boot Barn has me hooked up. Nashville has its own fashion vibe and it’s cool to relax, look good, and have fun.”

But Gilliland knows there is work to do in Nashville, too. His rookie season continues as does his learning experiences. Gilliland, who finished second in the NASCAR Camping World Truck Series at Nashville in 2021, is excited to return for the first time in a Cup car.

“It’s always a lot better when I come into a track where I have laps there,” Gilliland stated. “We finished great here last year when we were in the Truck Series. Hopefully, I can use that knowledge this weekend and give Boot Barn a great result on the track.”

Fans will have the opportunity to meet Gilliland on Saturday, June 25, from 3:00 to 5:00 p.m. at the Boot Barn store located at 318 Broadway, Nashville, Tenn. 37201. Gilliland will sign autographs, take photos, and fans can browse the Boot Barn showroom floor in downtown Nashville.

Gilliland and the No. 38 Boot Barn Mustang will then take to the track at Nashville Speedway on Sunday, June 26, at 5:00 p.m. ET on NBC.