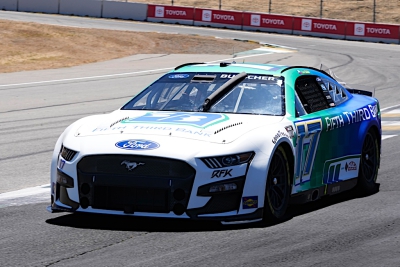 Chris Buescher led laps, ran inside the top-five much of Sunday afternoon, and was a position away from victory lane as he drove the Fifth Third Bank Ford to a second-place finish at Sonoma Raceway for his best finish of the season.

“This team did a great job and put a really fast Fifth Third Bank Mustang underneath me this weekend,” Buescher said. “What a way to return and come back to the race track, but I didn’t get the job done there at the end. I feel like we should have had the win and I didn’t get it. We were close, just needed more. I needed to make it happen on that restart and I didn’t, but if we can keep getting cars like this then a win will come. It was an awesome run, and I should be happy, but I’m disappointed to be that close and not get it.”

Fresh off his return from COVID, which sidelined him last week in St. Louis, Buescher put the No. 17 near the front in qualifying Saturday afternoon with the third-quickest lap in the field. It marked his second such top-five qualifying effort in as many months (pole – Dover).

Once the green dropped for the 110-lap race Sunday, Buescher held his own inside the top five and was fourth at the time of the first caution at lap 10. That yellow turned out to be one of only two non-stage cautions.

The team would short-pit the stage, hitting pit road at lap 23 from the second position. He would end the stage in 13th, then after track position flipped under the break fired back off second for the second, 30-lap stage. It ran caution-free, and again Buescher short-pitted the conclusion, this time from P2. Stops again would cycle and Buescher got credit for a P3 finish and seven stage points.

The Prosper, Texas, native was the leader to begin the final stage, where he led four total laps once the segment went green. With green flag stops cycling again, Buescher initially stayed on track to stay on sequence with the No. 99, but eventually hit pit road at lap 80 from the second spot.

After his teammate Keselowski inherited the lead for a few laps, a caution flew at lap 84 for debris in what would be the final of the day. At the time Buescher was ninth, but jumped to P2 on the ensuing restart. That came with 23 to go as he and the No. 99 stayed nose-to-tail for multiple laps in the run. Despite Buescher hanging within a half second for a majority of the laps, the 99 ultimately prevailed to snag the win.

The second-place effort marked the first P2 finish of Buescher’s Cup career. It is also his first top five of the 2022 season, and fourth overall top-10 on the year.

The No. 17 team will ride a wave of momentum now into the Cup Series’ lone off week of the year. Action returns June 26 at Nashville Superspeedway for the second half of the season and NBC’s return to coverage.