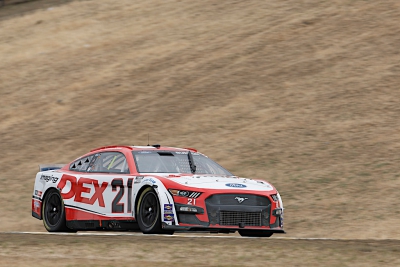 Harrison Burton and the No. 21 DEX Imaging team entered Sunday’s Toyota/Save Mart 350 at Sonoma Raceway with the goal of earning Stage points and scoring a good finish, as they did earlier this year at Circuit of the Americas.

They wound up with a mixed bag as they scored Stage points in both Stages but took the checkered flag in 28th place.

Burton, who started the race from 26th place, ran inside the top 25 for much of the first Stage, then stayed on the track when others pitted near the end of that 25-lap segment. He moved up to sixth place and finished the Stage there, earning five points.

After making his pit stop, he rejoined the race in 33rd place. The DEX Imaging team employed the same strategy in Stage Two, ending that segment in seventh place and collecting four more points.

Burton lined up 24th for the start of final segment of the race and made his final pit stop early, with 36 laps remaining.

When the caution flag flew with 27 laps remaining, and other drivers made their pit stops, Burton moved up to 15th place for the ensuing restart.

He ran inside the top 25 for much of the remainder of the race, which saw just two yellow flags for incidents on the track, one of them coming in the final segment. In the closing laps, Burton lost several spots to drivers who made later stops for fresh rubber and wound up 28th, which gave him a total of 18 points earned for the day.

Next up for Burton and the No. 21 team is the Ally 400 at Nashville Superspeedway on June 26.