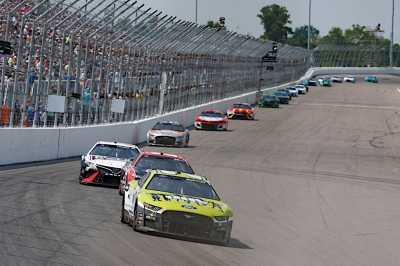 Harrison Burton and the No. 21 Ford/DAV team entered Sunday’s inaugural Enjoy Illinois 300 at World Wide Technology at Gateway bolstered by their best practice and qualifying sessions of the season but wound up 25th at the finish.

Burton started ninth and held that spot for the first 10 laps, then dropped back a bit before ending the first 45-lap Stage in 14th place.

He was running solidly in the top 20 during the second Stage before being swept up in a crash involving Chase Elliott. Contact with Elliott’s spinning car broke the splitter on the Ford/DAV Mustang and put Burton and the team at a big disadvantage for the remainder of the race.

He ended the second Stage in 29th place.

The Ford/DAV crew continued to work on the No. 21 Mustang on pit stops during the third and final Stage, and Burton had worked his way to 18th place when the race’s ninth caution flag flew for a spin by Cole Custer.

A dust-up on the restart led to Burton dropping to the rear of the lead-lap drivers as the race went to an Overtime run to the checkered flag.

Crew chief Brian Wilson elected to pit for fresh rubber and Burton was able to make up five positions, from 30th to 25th, on the final two laps as Burton’s fellow Ford driver Joey Logano drove his Team Penske Mustang to victory. It was Ford’s 715th triumph in NASCAR’s Cup Series.

Burton and the team now head to Sonoma Raceway for next Sunday’s 350-kilometer run on the California road course.