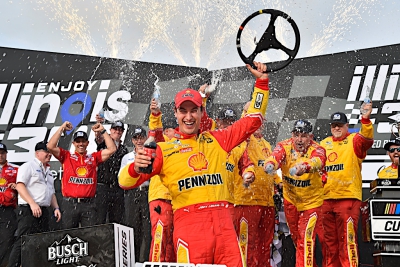 After a brake rotor failure sent Kevin Harvick’s Ford rocketing into the Turn 3 wall on Lap 236 of a scheduled 240 in Sunday's Enjoy Illinois 300, Busch, as the leader, picked the outside lane. Logano lined up beside Busch to the inside, with teammate Ryan Blaney behind him.

After the overtime restart—with Blaney giving Logano’s No. 22 Team Penske Ford a serendipitous shove—Logano and Busch swapped the lead until Busch washed up the track in Turns 3 and 4 on the white-flag lap.

That enabled Logano to secure the victory by .655 seconds and indulged his penchant for winning debut races in the NASCAR Cup Series. Last year, Logano won the inaugural event on the Bristol Motor Speedway Dirt Track.

“Thanks for coming out, guys,” Logano said, acknowledging the sellout crowd. “I hope you enjoyed that race. It doesn't get much better than that. Racing for the lead like that with Kyle, one of the best. It was a lot of fun. Crossing each other back and forth. I knew it was coming. I did it to him; I knew he was going to do it to me. We crossed back and forth there a couple of times…

“What a great car, though. Really fast. I kind of messed up in qualifying, and (crew chief) Paul (Wolfe) made a great call putting two tires on (on the No. 22 Team Penske Ford’s final pit stop). Blaney did a great job with the push down into (Turn) 1, which kept me close at least and being able to make the move. Good racing there.”

The victory was Logano’s second of the season and the 29th of his career. Kurt Busch ran third behind Logano and Kyle Bush, with Ryan Blaney coming home fourth and Aric Almirola fifth.

“Our car just took too long to come in,” Busch said. “Better on the long run. Better up top. Top is not good to fire off on, but great job by the Snickers guys. Again, we stayed in the running all day long and fought hard and thought maybe we could—but that was it.”

As riveting as the drama of the overtime turned out to be, the subplot involving Chastain and his two primary victims—Denny Hamlin and Chase Elliott—drew the lion’s share of the focus as the race developed.

On Lap 64, Chastain drove hard into Turn 1 behind Hamlin and knocked the No. 11 Toyota up the track and into the wall, ending Hamlin’s chance at a strong finish. Hamlin subsequently expressed his displeasure by running Chastain down to the apron on the backstretch.

On Lap 101, contact from Chastain’s Chevrolet turned Elliott’s No. 9 Camaro and sent it spinning into the inside barrier off Turn 4. On the subsequent restart, Elliott got a measure of revenge when he rubbed Chastain’s Chevy and moved it up the track.

Chastain didn’t mince words in taking responsibility for the trouble he caused on the track.

“It was terrible driving,” said Chastain, who finished eighth. “It’s one thing to do it once, but I just kept driving into guys. At this level, I’m supposed to be better than that…

“I owe half the field an apology, and words aren’t going to fix it. So I’ll have to pay for it on the track and almost did today, and I deserve everything they do. I can’t believe I continue to make this many mistakes and overdrive the corners and drive into guys.”

Hamlin seemed to indicate that racing karma still had to play out.

“It’s good that he takes responsibility, but ultimately it ruined our day,” Hamlin said. “I think we were kind of racing hard there for a while on the inside. He kept trying to slide up in front of us and wasn’t able to, because I wasn’t willing to just back off and let him slide up in front.

“It didn’t take long after he tucked in behind us that he wrecked us. The unfortunate part is that it didn’t look like he got too shy after that, because I think he got the 9 (Elliott) after that one. We all have to learn the hard way, and we’ve all had it come back around on us—and it’ll be no different.”

Martin Truex Jr. finished sixth, followed by Erik Jones, Chastain, Christopher Bell and AJ Allmendinger, who won Saturday’s debut Xfinity Series race at Portland International Raceway and started from the rear of the field with no prior laps on the track after flying to St. Louis for the Cup event.