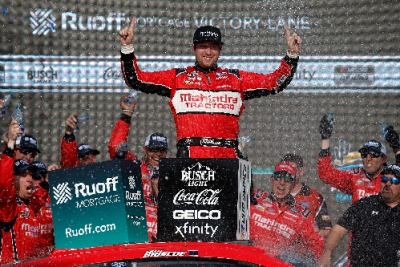 Chase Briscoe in victory lane at Phoenix Raceway earlier this season. He hopes to do the same Sunday at World Wide Technology Raceway after earning his first Cup Series career pole. Getty Images

In his second career season in the NASCAR Cup Series, Chase Briscoe in his No. 14 Ford Mustang for Stewart Haas Racing, scored his first career pole at World Wide Technology Raceway with a time of 32.544 seconds. “It felt like our car in practice was a really good car,” said Briscoe in the media center after qualifying. “Probably a third or fourth place car really. That first round of qualifying, it felt like I didn’t run a very good lap at all being truthful. To see how fast it was today, I knew we would be very good going into the second round of qualifying. I overdrove the second round lap I felt like but we were able to hold it off which is super cool.”

With his first pole and win coming on coming on very similar tracks in the same year, could Chase Briscoe be a championship favorite? Why not? The points are so even that this championship could go to anyone. Briscoe commenting on the matter said, “We have to get to Phoenix first. It doesn't matter how good you are there. If you would have asked me that four or five weeks ago, I would have said no way. But we have gotten back to where we were at the beginning of the season and I feel like we have our speed back. This NextGen also plays a ton of factors in it so we will just have to see.”

The top 10 starters in Sunday’s race in the Enjoy Illinois 300 will be No. 14 Chase Briscoe in first, No. 2 Austin Cindric in second, No. 20 Christopher Bell in third, No. 8 Tyler Reddick in fourth, No. 12 Ryan Blaney in fifth, No. 11 Denny Hamlin in sixth, No. 22 Joey Logano in seventh, No. 10 Aric Almirola in eighth, No. 21 Harrison Burton in ninth, and No. 1 Ross Chastain in 10th. Since this is the Inaugural event at World Wide Technology Raceway in Madison Ill., that means that technically Chase Briscoe holds the track record for the fastest time in a Cup Series car.