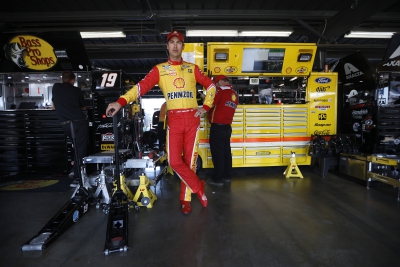 After a 50 minute practice session, Joey Logano and his No. 22 Shell Pennzoil Ford Mustang topped the speed charts with a time of 32.906 seconds and an average speed of 136.753 mph. “The memories are coming back from 2008,” Logano said about his practice time and his lone Xfinity Series start at the track. “It is smoother than it was back then. Moving around, trying new things, shifting. It's fun to get off the gas, hit the break, and use both pedals in the car again.” The Ford Mustangs had four of the top seven spots in the lone practice session for the NASCAR Cup Series, and look to be a contender in qualifying tomorrow and on the race Sunday.

Ryan Blaney scored the second fastest with a time of 33.025 seconds. Based on his prior experience at World Wide Technology, Ryan said, “It took me a minute to kind of remember the place since it was 8 years ago since I've been here. I think racing here before helped me a little bit. Harrison Burton was fast right out of the gate and he has been here recently in the Trucks Series a couple of years ago. I think the guys who have run here helped them be fast in practice.” On the other hand, he doesn’t think it will be a factor though on who wins here Sunday afternoon. “Everyone learns so quickly and gets up to speed so fast. Even if you haven’t ever been here, you will pick it up fairly quickly. It might help them get up to speed fast but everyone gets used to it after 50 minutes of practice.”

Although some found the session helpful, the track did come out and grab some people. Ben Rhodes, who is filling in for AJ Almendinger who is in Portland for the Xfinity Series, got into the wall in turns three and four in his No. 16 Chevy Camaro for Kaulig Racing and went to the garage early. Parker Kligerman, who is piloting the No. 15 Ford Mustang for Rick Ware Racing, had to pull in the pits after his car caught on fire and will have to go to a back up car. On Saturday, the NASCAR Cup Series cars will qualify to see who is on the pole for the Inaugural Enjoy Illinois 300 at World Wide Technology Raceway in Madison, Ill. That will take place at 11 a.m. Eastern on FS1, MRN, and SiriusXM NASCAR Radio.