Inaugural Cup Race at Gateway up Next 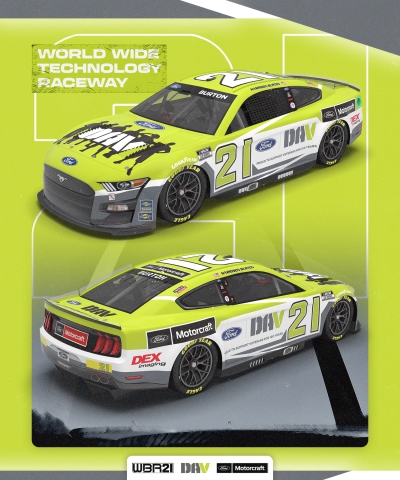 Harrison Burton and the No. 21 Ford/Disabled American Veterans team are headed this weekend to a new venue for NASCAR’s Cup Series, but one that Burton and his crew chief Brian Wilson are familiar with.

Burton has raced in both NASCAR’s Camping World Truck Series and the ARCA Menards Series at World Wide Technology Raceway at Gateway, the 1.25-mile track located in the St. Louis suburb of Madison, Ill.

And crew chief Brian Wilson competed there back in 2010 as a race engineer for Brad Keselowski in the series now known as Xfinity. That team came away a winner in the fall race at Gateway that year.

“It’s really exciting to be going to the St. Louis market this weekend,” Wilson said. “Personally I always enjoy the challenge of going to a new track for the Cup series.

“This weekend I’m especially interested in the extended practice format that we’ll have. We get extra time and will be able to make more changes to the setup than on a normal weekend.”

Wilson said he, Burton and the No. 21 Ford/DAV team are hoping to continue down the technological path they’ve taken at recent races.

“The past few weeks we’ve been working on a new direction that showed some potential at Charlotte in qualifying,” he said. “We’ll continue on that path and try to utilize the extra practice time to maximize the potential.”

And Wilson said his No. 21 team showed Sunday in a marathon Coca-Cola 600 that even when things looked discouraging in the early laps, each member continued to put forth a maximum effort.

“I feel like last week’s race shows the fight in this team, which resulted in a great 11th-place finish,” he said. “With that fighting mentality we’ll continue to push to learn and improve on our speed.”

For this weekend’s race, the No. 21 Mustang will carry a special paint scheme celebrating the 100-year relationship between Ford and the Disabled American Veterans.

That relationship began in 1922 when Ford provided 50 Model Ts for veterans of the first World War to attend the second national DAV convention.  In the years since, Ford has worked to ensure that veterans have access to reliable transportation to reach their healthcare and medical appointments.

Ford’s efforts on behalf of veterans are also evident in the company’s employment of approximately 6,000 veterans.  Since 2019, the Ford-Lincoln Veteran Careers Program has been a part of New Ford Tech, a program that hires and trains Ford service technicians.