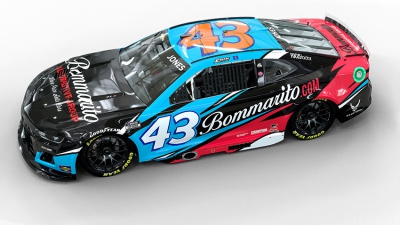 “We are honored to be a part of bringing NASCAR to the St. Louis region and thanks to the support of race fans across the country, we’ve demonstrated that when you win on Sunday it generates sales on Monday”, said John Bommarito, President of the Bommarito Automotive Group. “As an iconic brand here in the St. Louis and Midwest marketplace, the Bommarito Automotive Group could not be prouder to adorn the legendary Petty GMS No. 43 Chevy for the inaugural NASCAR Cup Race right here in St. Louis. Bommarito and The King, together making history.”

"I've been a dedicated race fan for decades and to have the opportunity to partner with Richard Petty and Petty GMS has been an opportunity of a lifetime,” said Chuck Wallis, Vice President and General Manager of the Bommarito Automotive Group. “To be able to be involved in the motorsports industry at the level Bommarito has dedicated to it is an absolute dream come true. How great is it that we now get to incorporate Petty blue – the most iconic brand in motorsports – with ours. Great partners and friends.”

To kickstart weekend activities, Richard Petty Day presented by the Bommarito Automotive Group will be held on Friday, June 3. As previously announced by World Wide Technology Raceway, the Governors of Illinois and Missouri will proclaim June 3 as Richard Petty Day. The proclamations will be followed by ‘The King’ making ceremonial first laps on the track in a replica of his 1981 Daytona 500 winning car prior to Cup Series practice.

Fans obtaining an oil change or service at Bommarito Service Centers during the month of May will receive two free tickets to attend Richard Petty Day festivities on June 3.