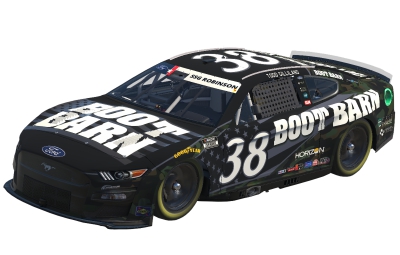 This Sunday evening, NASCAR Cup Series rookie Todd Gilliland will compete in his first Coca-Cola 600 at the Charlotte (N.C.) Motor Speedway. He will do so honoring the life of Staff Sgt. Conrad A. Robinson of the United States Army this Memorial Day weekend.

“This weekend is about honoring those who have served and sacrificed so we can go out and do cool things like race,” said Gilliland. “It is special for me to honor Staff Sgt. Robinson and have his family with us. It puts things in perspective, and I expect it to be a humbling experience. I want to thank my team and Boot Barn for making this honor happen.”

Gilliland is excited for the challenges of the Coca-Cola 600 – the first 600-mile race of his career.

“I have run really well in the past at Charlotte in both the NASCAR Truck Series and the ARCA Series,” stated Gilliland. “But nothing really prepares you for a 600-mile race. I just need that experience, but we have talked about it all season. We want to finish the race, be on the lead lap, and get as much as we can at the end of these races. I will be patient; we will work on the car all night and then give Boot Barn the best I have at the end.”